Rockfall monitoring in Preonzo May 2012

The area around the Roscera Alp in southern Switzerland has been known to geologists as unstable since decades. The canton Ticino had crack meters placed at cracks visible on the alp and laser distance measurements had been carried out from the valley below. GEOPRAEVENT has also had the chance previously to measure the deformations with the interferometric radar on three occasions in 2011, placing the equipment at a distance of 2km from the slope, thus allowing for fairly high-resolution scans with 4 x 8 m sized pixels.

Extensive movements were detected in April 2012, demonstrating deformation velocities that were far above the normal. The canton Ticino called in on us just in time. We had our interferometric radar up and running by the 1st of May 2012 – transmitting live data to the internet with less than 15 minutes delay. Local authorities could thus constantly integrate the latest data into their decisions.

On May 6 and 7 2012, velocities tripled due to precipitation events and reached 3 mm/h. Even though the weather improved, the situation remained unchanged – was the landslide imminent?

The widespread movement continued throughout the next week, constantly creeping with 4 mm/h until May 13, when accelerations increased dramatically. Local authorities evacuated the run-out zone and closed off the cantonal road. Based on a linear extrapolation of 1/v = 0 and velocity analyses, we estimated that the final fall would take place on the evening of May 14 or in the course of May 15. These analyses were also automated and provided as live data to local authorities.

In the early hours of May 15, things finally started moving (see video here). An estimated total of 300,000 m³ of debris plunged down the valley, fortunately not all at once, and movements ceased towards 5 a.m., without having caused any damage. However, half of the potentially unstable material had remained at the top, as this picture shows impressively: 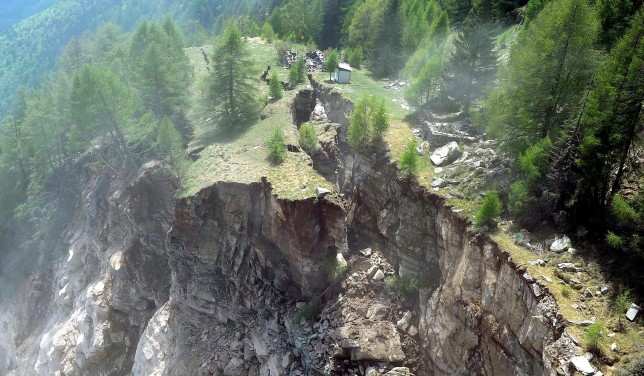 Were further events to be expected? How extensive were movements after the first part of the landslide? Since most of the originally mounted monitoring equipment had been destroyed during the event, our interferometric radar had to deliver the answers. We could give an all-clear few hours after the main fall. Some parts of the rupture zone were still moving, but were coming to a halt fast. 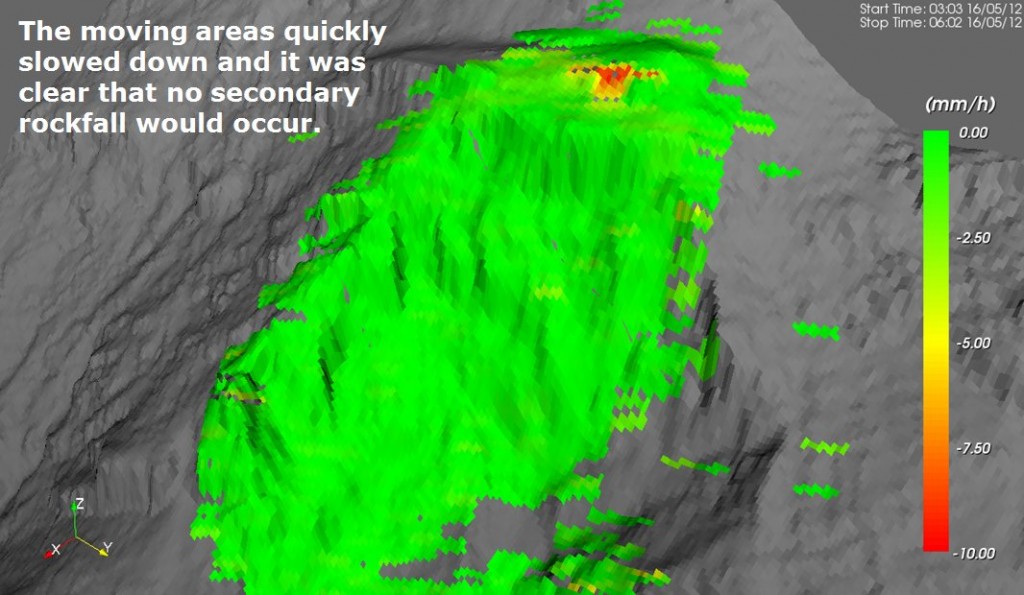 The last of the ‘red zones’ continued moving for another two weeks, but then deformations decreased to non-dangerous levels. Secondary rockfall was not to be expected, our work was completed (effective of 30 May 2012).

We would like to thank the canton Ticino, especially Giorgio Valenti, for the excellent cooperation and trust. 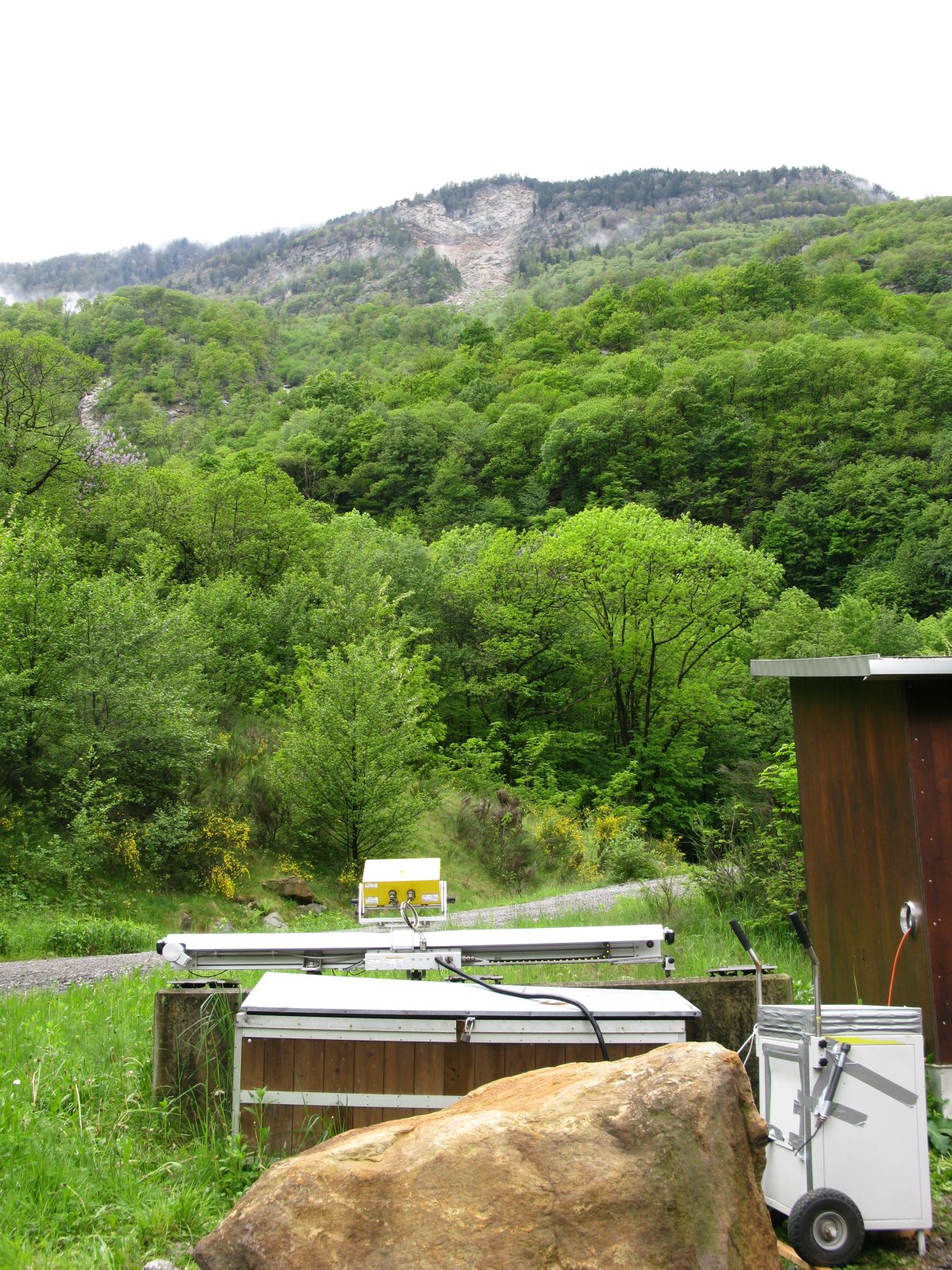 The interferometric radar is located at a distance of approximately 2 km.

Measurement series show accelerated velocities after heavy precipitation on 6 and 7 May 2012. 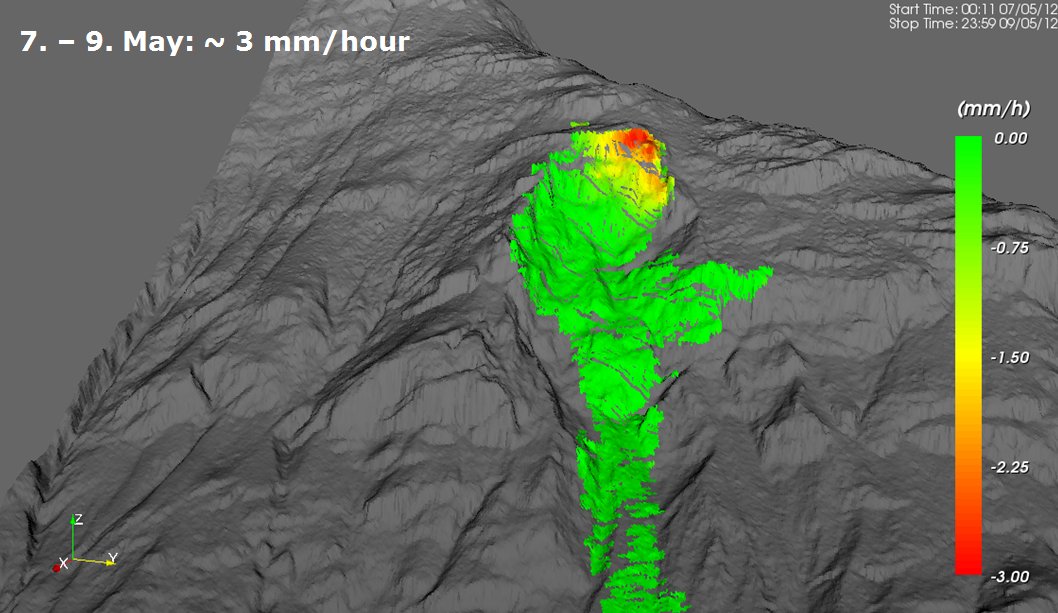 The rockfall prognosis proved to be correct.

After the main rockfall: A part of the moving rock mass remained. Radar monitoring was therefore continued. 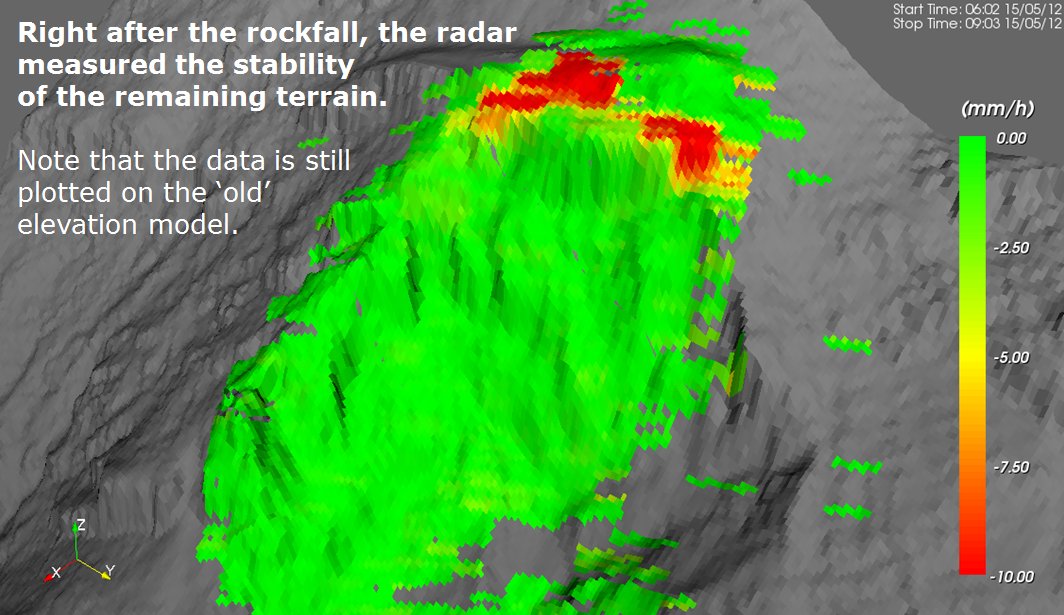 Compared to local measurement technologies that suffered partly and complete damage during the rockfall, the interferometric radar was fully functional right after the event. 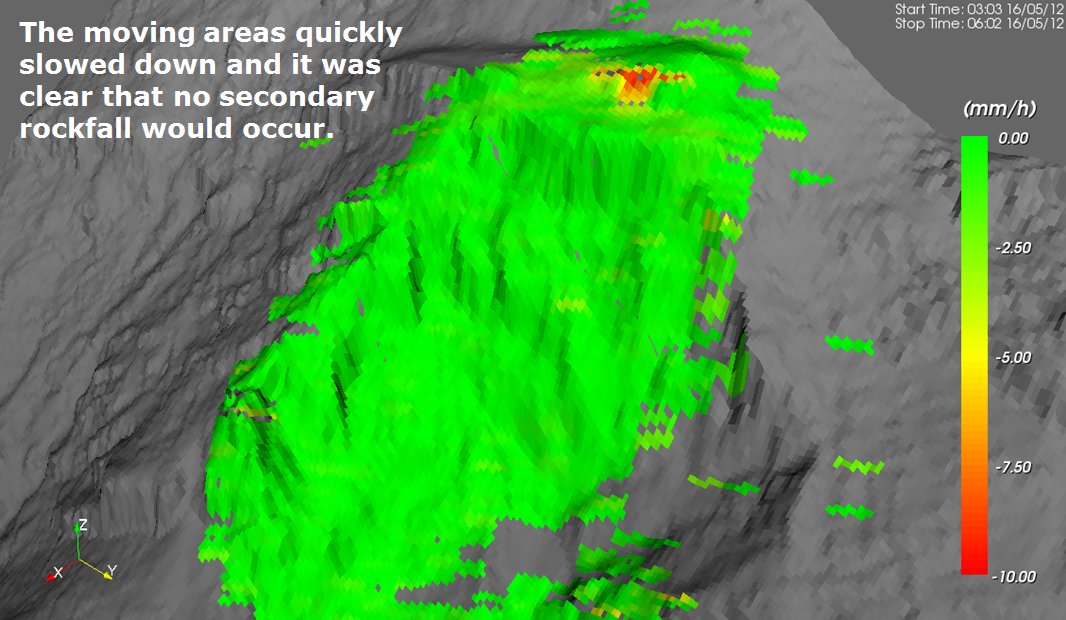 The “red zones” of the remaining rock mass slowed down quickly and further rockfall was not expected. 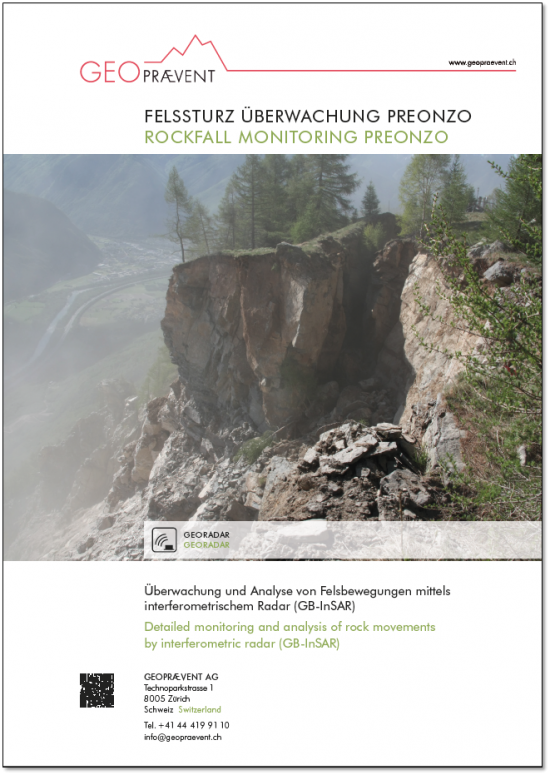