Monitoring of instabilities: HD-camera vs radar

The recently introduced surface deformation analysis by HD-camera was challenged last summer when a large part of the Trift glacier accelerated steadily and eventually collapsed on 10 September 2017 (News October). At the Weissmies monitoring station, the HD-camera had been observing this unstable glacier part since the beginning of the year 2017. Whereas the HD-camera was running alongside the interferometric radar for the first few months, it assumed monitoring solely from spring 2017 onwards. Throughout August, the daily deformation analyses showed a clear acceleration of the glacier area under observation (video here). Given the urgency of the situation and the requirement for more precise and frequent data, the radar was reinstalled as emergency. The radar measurements and the assessment of glacier experts allowed to correctly predict the collapse of the unstable ice masses within 24 hours.

Retrospective evaluation of velocities derived from HD-camera deformation analysis, revealed that the break-off prognosis by HD-camera was remarkably accurate. The interpolation of inverse velocities indicated the break off would take place around 12 September 2017.

Figures 1 + 2: Interpolation of the inverse velocity gives a prediction of the approximate time of collapse. The trend of the curve above indicates the glacier would collapse on 12 September 2017. It actually failed a little earlier; on 10 September at 6 AM.

Both technologies are perfectly capable of high-quality surface deformation analysis at long–distance. However, there are some main differences in characteristics and intended use for monitoring instabilities. The following table gives an overview of both measurement methods in terms of deformation analysis: 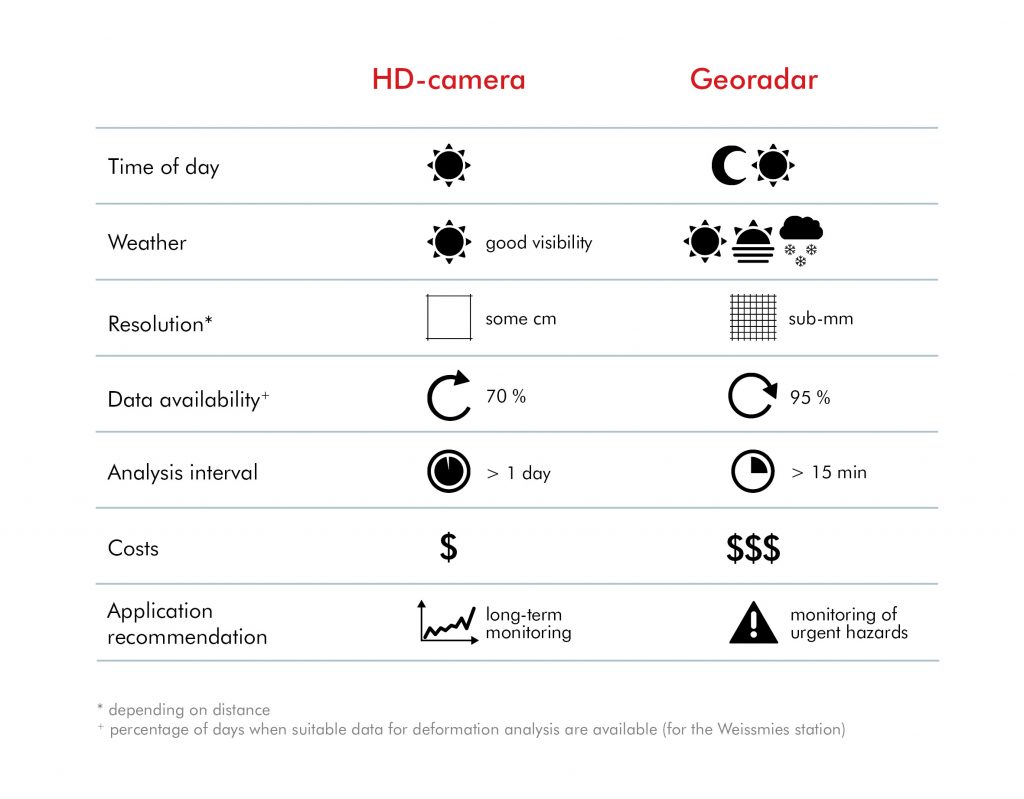 The main difference between the radar and the camera method is definitely the availability of data; whereas the HD-camera requires day light and good visibility, the radar functions at day and night and in all-weather (heavy rain and snow storms can influence radar measurements for a short time). The radar is hence a very reliable option with high data availability suitable for monitoring of urgent ice or rock instabilities (e.g. the glacier collapse at Weissmies). Further, the high accuracy of the radar allows for small analysis intervals of minimum 15 minutes compared to minimum one day for the HD-camera. The HD-camera on the other hand is a cost-effective option for long-term monitoring of uncritical instabilities, such as long-term movements of glaciers or slopes.