The Carrerabach is a tributary of the Vorderrhein and joins the Ruinaulta (Rhine Gorge) in the Carrerabach delta near the village of Valendas-Sagogn. The Carrera ravine is a wild, unpredictable gorge with a frequently changing watercourse and, especially during floods, large quantities of stones and erosion material being transported downhill. The debris accumulates in the Carrerabach delta, where it forms an alluvial landscape of great value for flora and fauna. The railway line of the Rhaetian Railway RhB meanders through the Rhine Gorge and crosses the Carrera river over a bridge just above the delta. Heavy precipitation can lead to rapid surges of the Carrera river and result in the bridge overflowing. For environmental reasons, debris clearance within the delta is only permitted to a limited extent and despite construction of a new bridge and widening of the bridge underflow, the tracks were flooded once again in recent years (faszinatur.ch). Consequently, the construction measures were supplemented in 2018 with a tailor-made and fully automatic alarm system from Geoprevent. 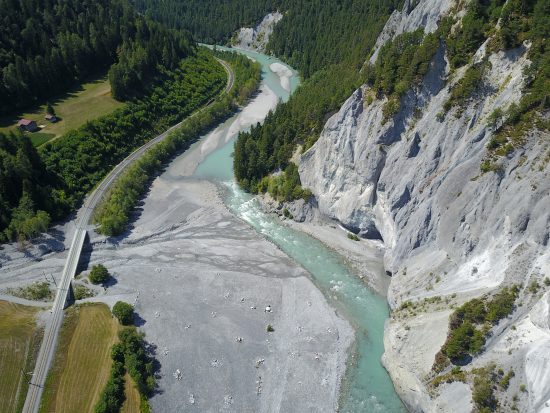 We installed an automatic alarm system consisting of two measurement stations to ensure early warning for the RhB train operator in case of a debris flow (see below for an overview).

In order to detect debris flow at an early stage, a certain warning time is required. For this reason, the upper measurement station is located 1.5 kilometres upstream at a bridge over the Carrera creek. It consists of two redundant gauge radars and two cameras. The gauge radars continuously measure the water level of the Carrera creek and trigger an alarm if a predefined level is exceeded. The webcams automatically generate event images and allow for remote visual inspection of the site at any time. Infrared spotlights enable recording of the ravine in the dark as well. Additionally, the cameras take regular status images and can be accessed live if required. Alarm transmission is ensured redundantly via radio and mobile radio from the upper to the lower station and finally to both railway signals. The detection station is operated autonomously with a fuel cell and solar panels, since electricity is not available at this site.

The lower station is located at the mentioned RhB bridge and monitors the river mouth of the torrent. This station consists of a laser profile scanner (lidar) and a emote controlled, mobile webcam. The laser regularly scans the profile of the bridge underflow and transmits the measurements to the online data portal. The webcam automatically records event images upon event detection by one of the gauge radars at the upper station. In addition, the webcam takes regular status images in defined intervals. This station is supplied with grid power.

Recorded and live measurement data and images are displayed in the Geoprevent online data portal. Authorized users can access and view all data at any time. In addition, an integrated control center displays the status of the measurement system and associated traffic signals and can be used for ralarm reset after an event. An alarm further triggers automatic notifications via SMS of the responsible persons as well as Geoprevent. After a one-year test phase, the alarm system went into operation in May 2019. Since then, two minor debris flow events have been successfully detected.

During critical weather situations, we can rely on the alarm system and no longer have to be on constant alert. The different measurements allow us to learn more about the characteristics of the Carrera creek and to assess situations even better in the future. 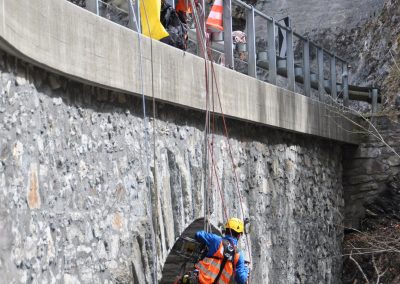 Experienced Geoprevent engineers install the sensors on the upper bridge. 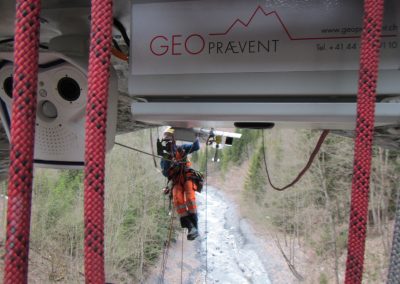 The upper station: The bridge is located about 1.5 kilometres above the RhB railway line. A radar and a camera each monitor the part above and below the bridge, respectively. 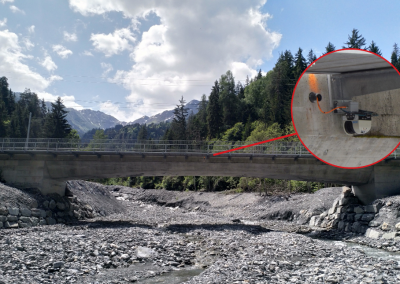 The lower station at the RhB bridge: The laser scans the profile of the Carrera bridge underflow frequently. 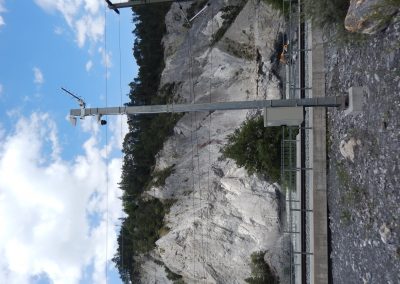 The remote-controlled camera of the lower station is mounted to a four meter mast. 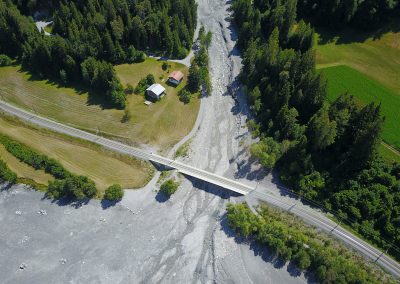 The Carrera river delta is an important floodplain for flora and fauna. For this reason, strict regulations apply to debris removal originating from Carrera creek. 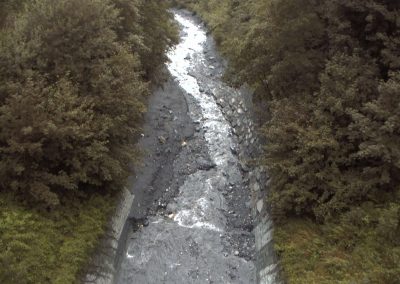 In August 2019, several small debris flow events were detected and the two signals on the RhB railway line were activated accordingly by the alarm system. 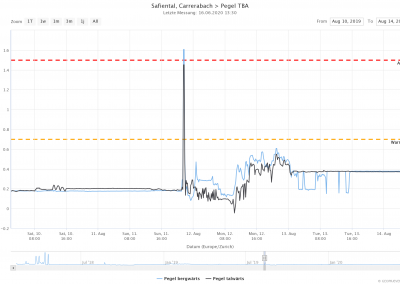 All data of the two gauge radars, the webcams and the laser profile scanner are displayed in the online data portal. In the event of an alarm (as here in August 2019), the system automatically notifies the responsible persons immediately via SMS. 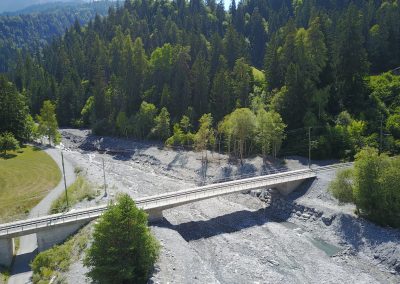 Our alarm system monitors the RhB railway line at the confluence of the Carrera creek and the Vorderrhein river.