Throughout the past ten years, glacial lake outbursts from the Kyagar Glacier in western China (Xinjiang province) have produced several devastating flood waves along the Keleqin/Yarkant Rivers, causing substantial damage to infrastructure and claiming human lives in the valleys below. In the Shaksgam Valley, at an altitude of 4,750m asl, the Kyagar Glacier naturally dams the waters of the Keleqin River, allowing volumes of up to 20 mio cubic meters of water so accumulate behind it. Whenever the water finds a path through the ice, dangerous flood waves result, threatening the inhabited areas some 560km downstream.

In order to alleviate the danger from such glacial lake outbursts, specialists and geologists from GEOTEST AG and GEOPRAEVENT AG installed two state-of-the-art monitoring systems in cooperation with the Chinese Ministry of Water Resources (MWR), the Swiss Federal Office for the Environment (FOEN) and the Swiss Agency for Development and Cooperation (SDC). Now, webcams at the tongue of the Kyagar Glacier provide constant surveillance of the situation and several radar level meters provides flow height data further downstream. All data, as well as meteorological parameters, are transmitted to the GEOPRAEVENT data portal several times a day via satellite link and the system automatically generates alerting SMS that are sent to local authorities if dangerous levels are reached.

Installations at high altitudes and in alpine environments are generally more complicated than in the lowlands, but the remoteness of the Kyagar site proved challenging at an altogether different scale. It took a time-consuming expedition on camels along unknown paths to transport material and personnel to the installation sites. The first part of the system was put into operation in August 2011, the Kyagar site at the glacier tongue was established in August 2012. 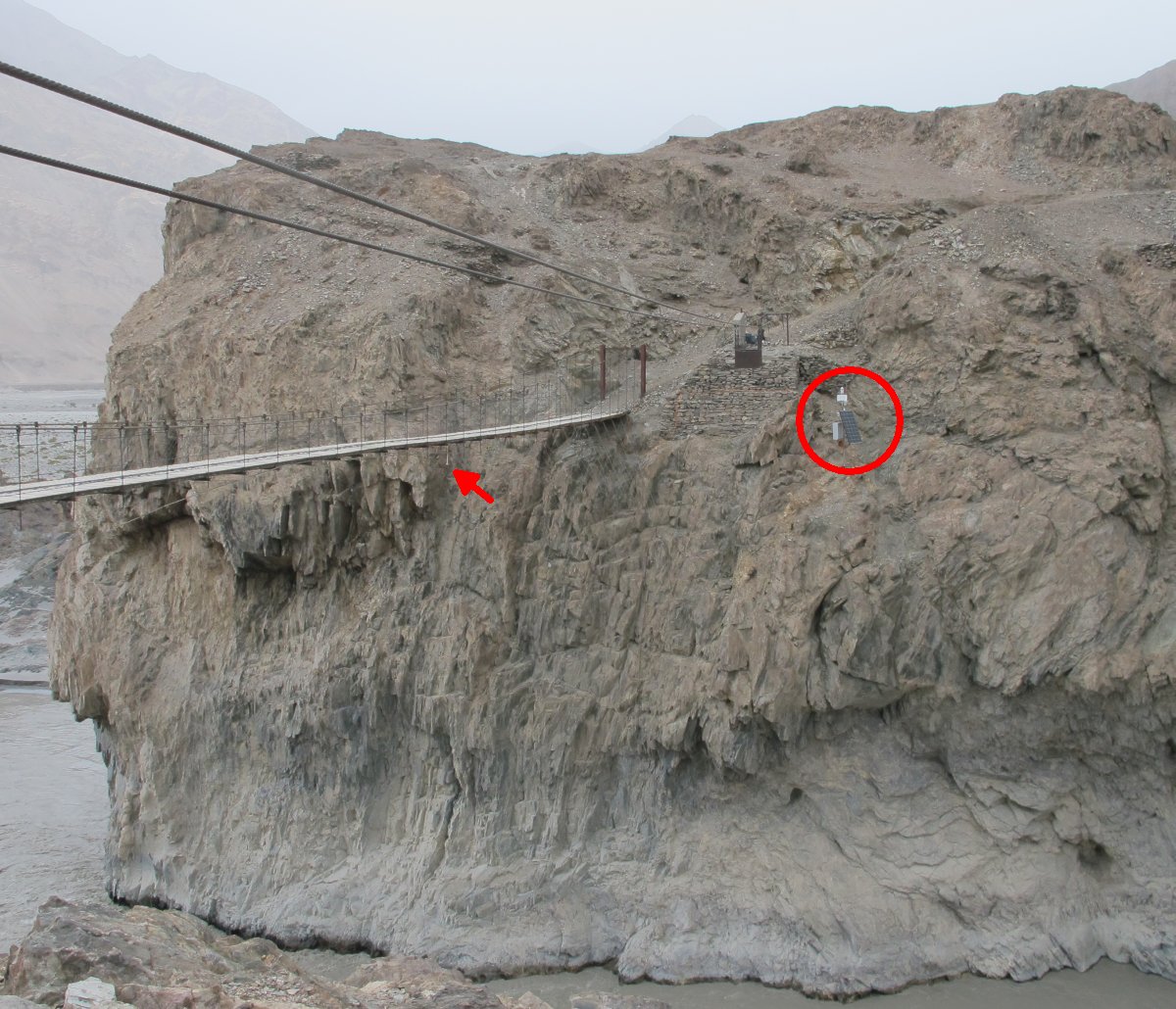 Flow height measurements at the Keleqin River with a logger station (red circle) and a level radars (arrow). 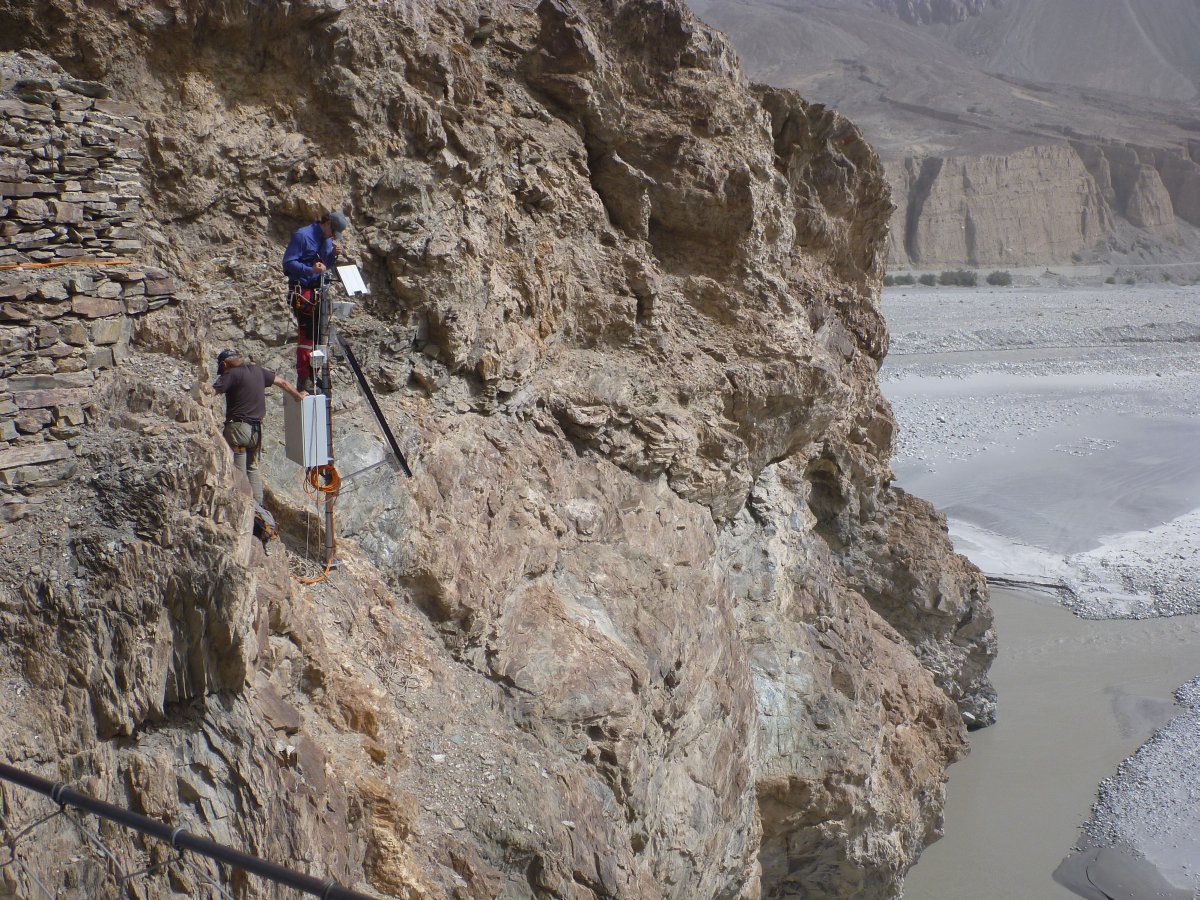 Installing a gauging station in one of the remotest area of the world. 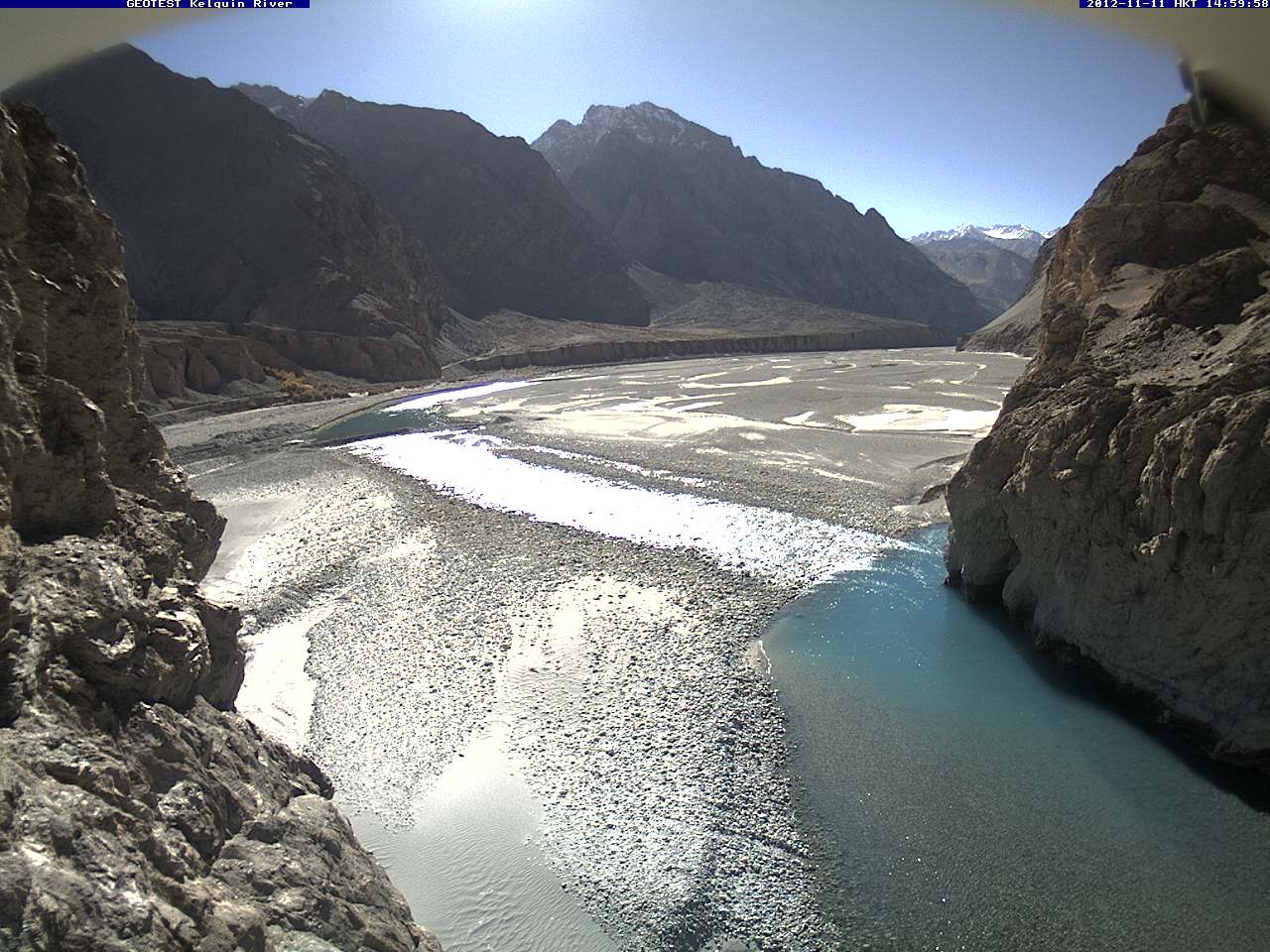 A webcam view down the Keleqin River. 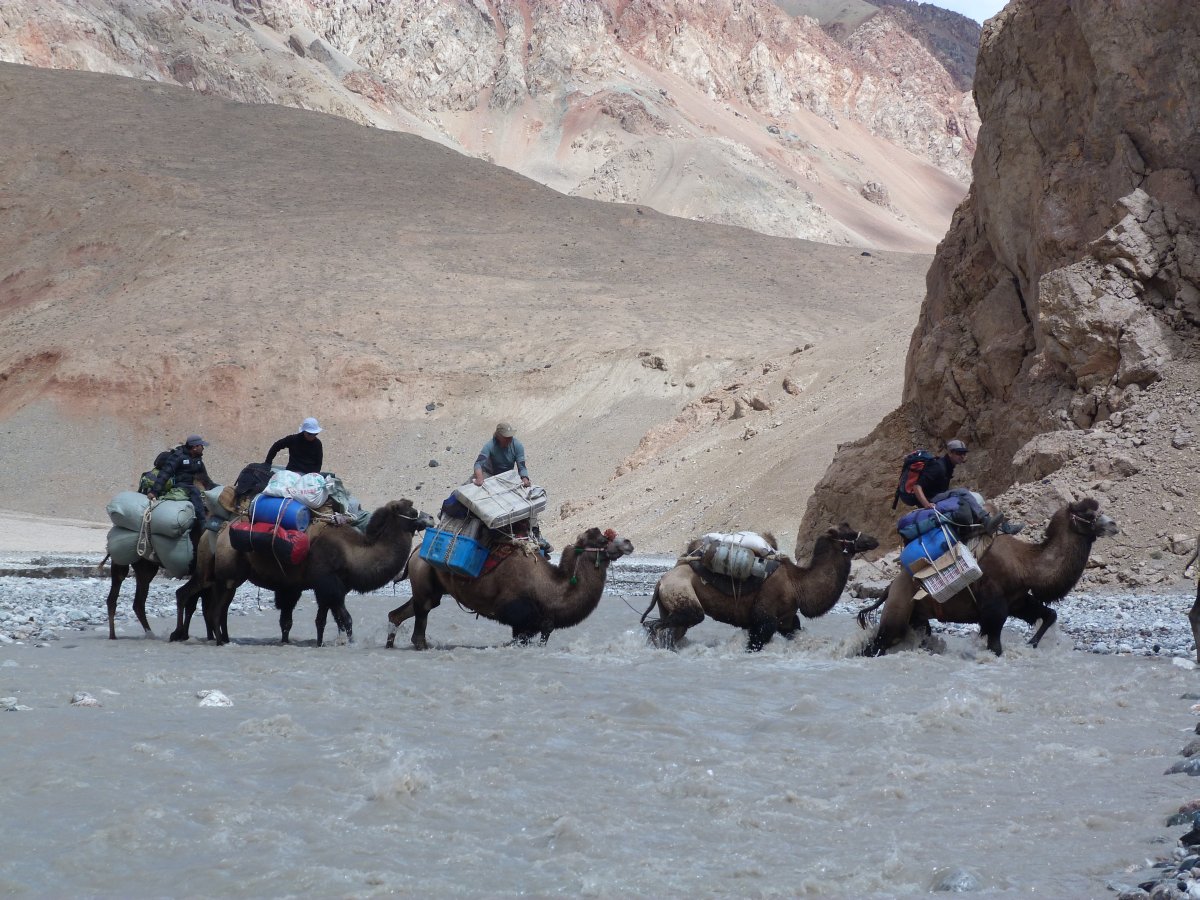 The installation of the station at the Kyagar Glacier required flawless planning: To reach the glacier tongue, a team of 12 people travelled for several days through completely unknown lands. The valleys in the area that border the Kashmir region have been deserted for decades. 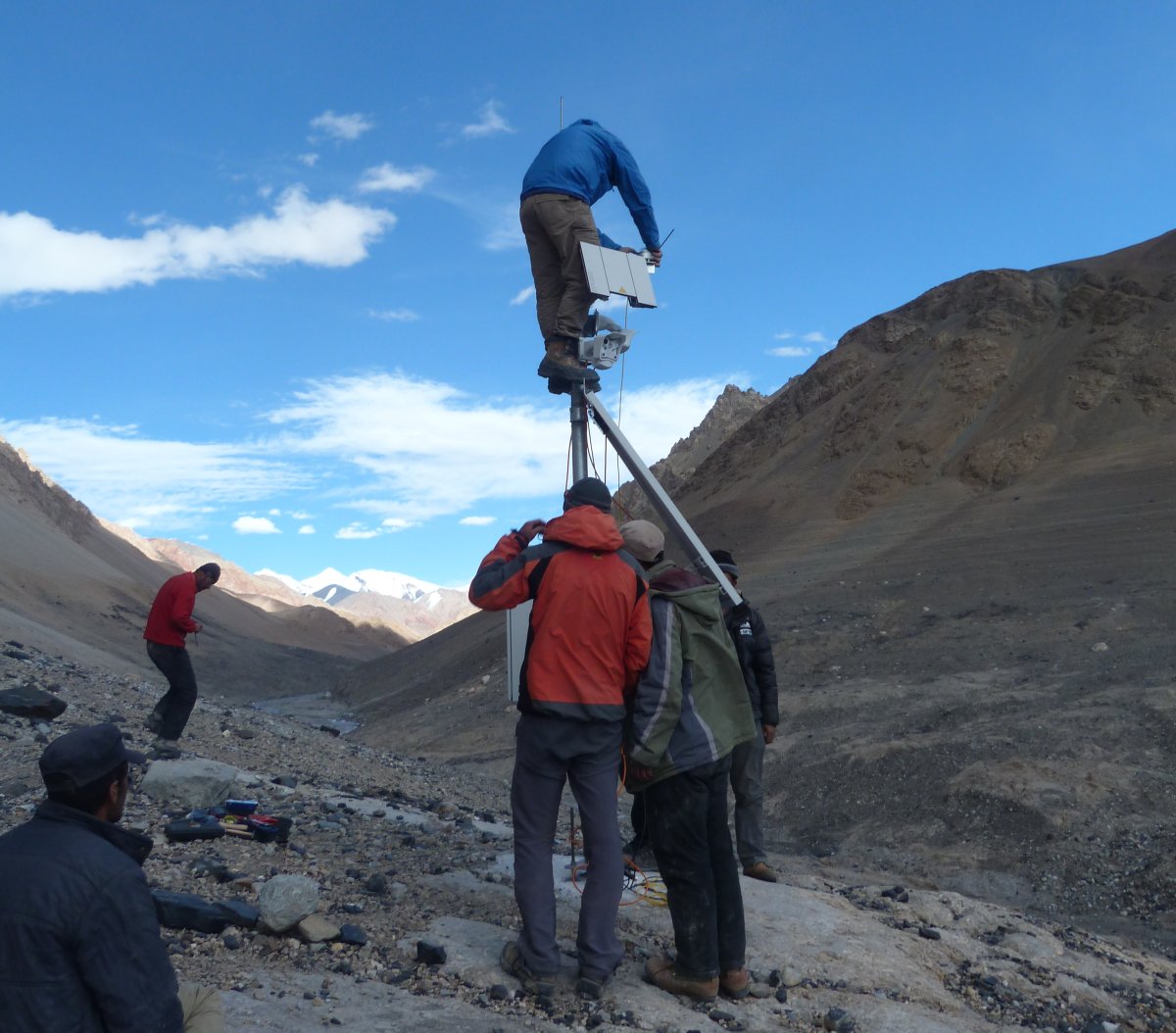 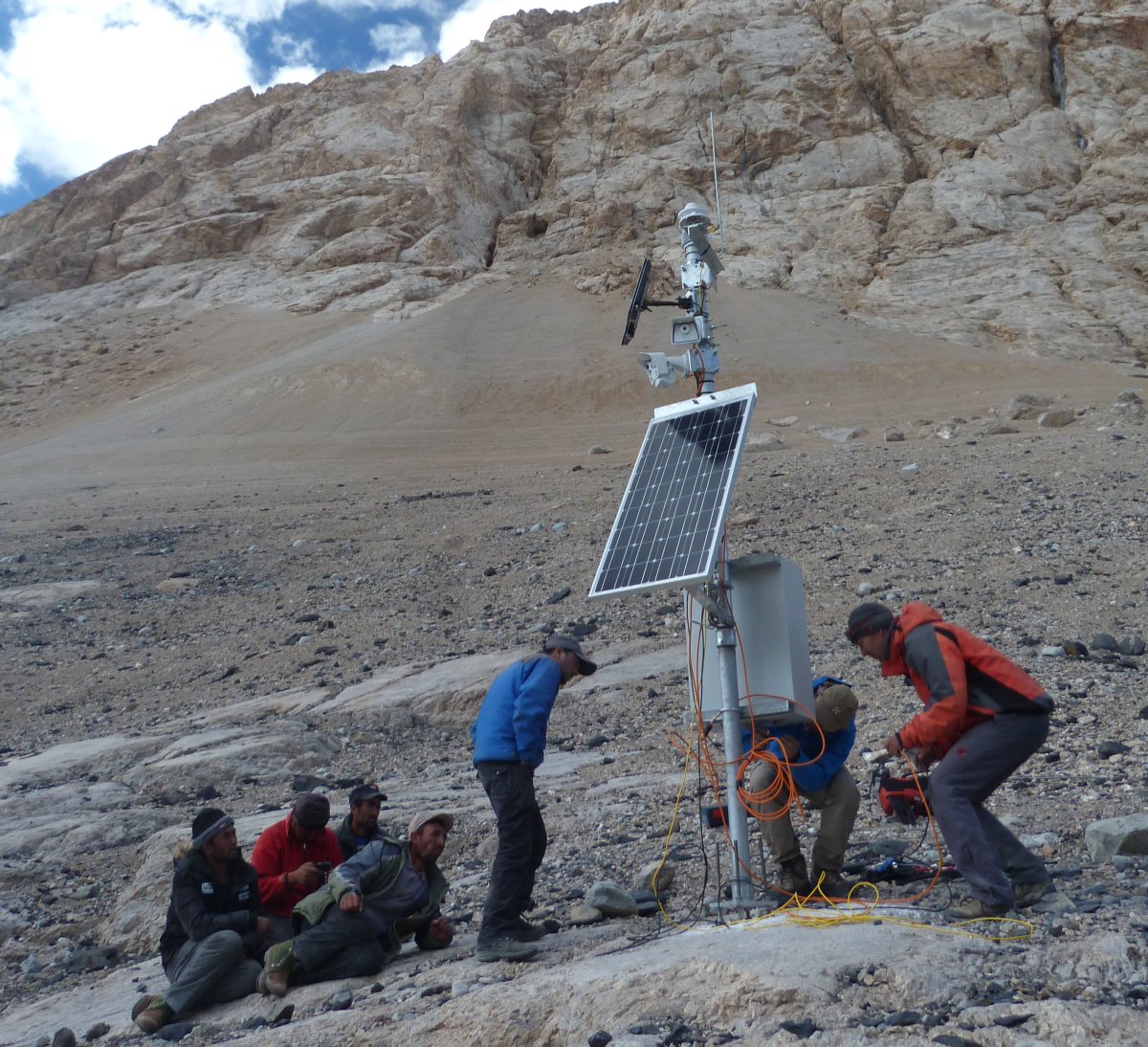 … and some finishing touches. 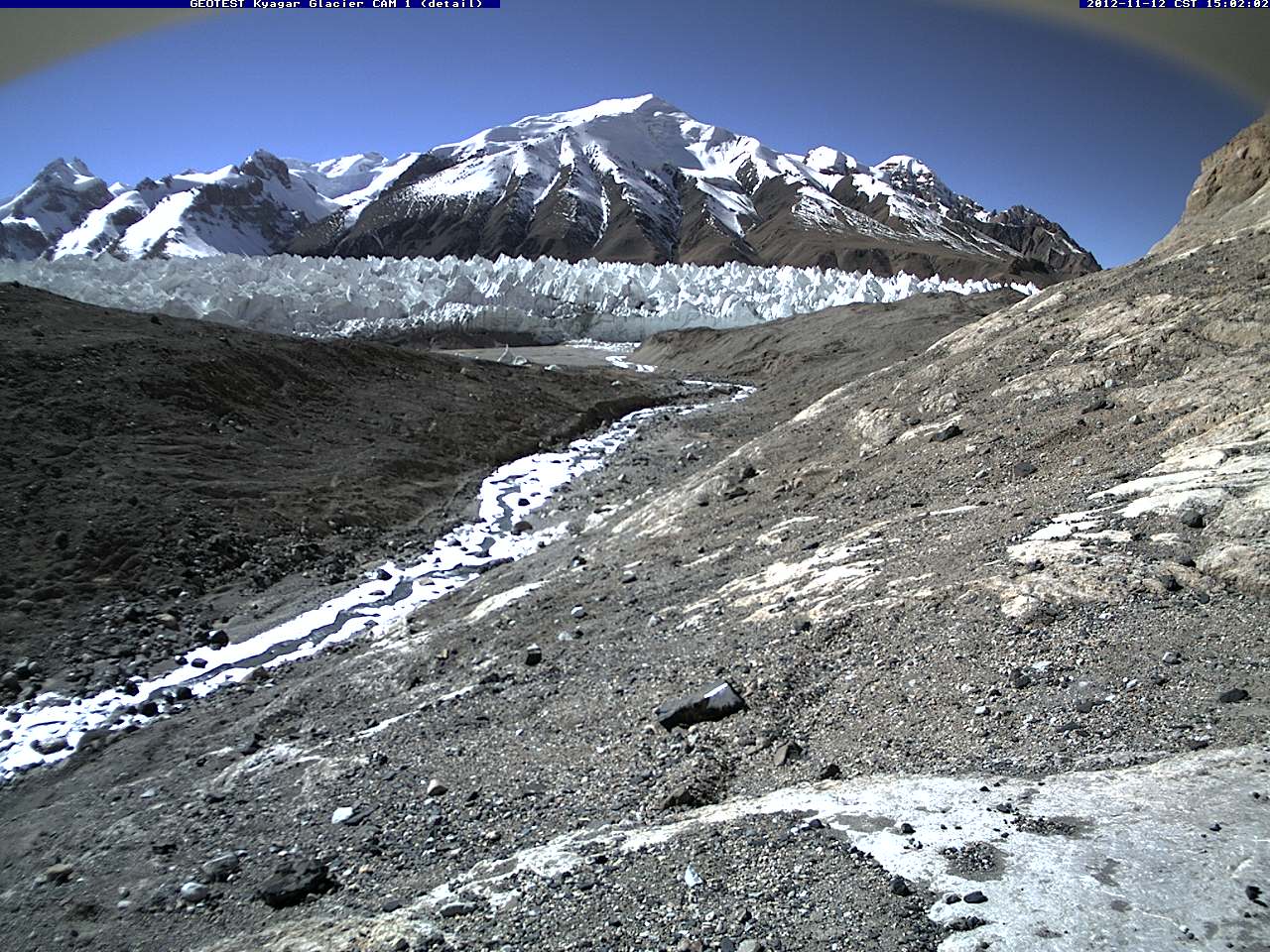 A daily image from the Kyagar Glacier on almost 5000m asl. At the time of this image, the proglacial lake is still very small.