On May 17, 2014 an ice avalanche coming off the Devdoraki Glacier on Mt. Kazbek (5033m) triggered an enormous debris flow with a volume of several million cubic meters (see location below). The debris covered the road that serves as an important connection between Georgia and Russia, killing several people and damaging a power plant and the border control station. In the same year, two rainfall triggered debris flows did more damage to the same area.

On behalf of Georgia’s National Environmental Agency and in cooperation with experts at Geotest, Geopraevent provided the involved agencies in Georgia with a proposal to set up an early warning and alarm system for the Kazbek debris flow.

Geopraevent installed a warning system that can detect the debris flows early enough to close the road and warn people of the approaching danger. The system comprises two stations: the first station monitors the glacier on the mountain and the second station detects debris flows in the channel, and all data is visualized online. In case of a debris flow, the local authorities and border police are automatically informed.

The lower station consists of two gauge radars and two trigger lines. The radars are used as the primary sensors to detect debris flows and the trigger lines serve as redundant units. When the radars and trigger lines detect a large enough debris flow, the border police are automatically alerted over radio to close the road. Additionally, SMS are sent to local authorities. All authorized users can also access the data online and use images and data to access the situation on site.

The upper station is used to monitor the Devdoraki glacier and the initiation area of the 2014 ice avalanche, providing regularly updated images online. Glaciologists and natural hazards experts can use these images to surveil the glacial changes. This makes it possible to react to changes on the mountain early on.

With this new system, the heavily trafficked road between Russia and Georgia can be closed with enough advance warning to ensure that everyone is out of harm’s way. 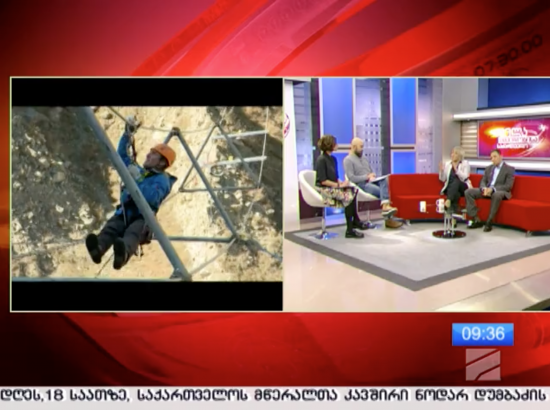 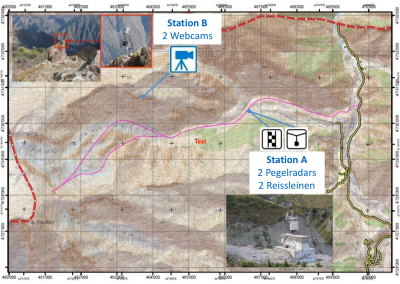 System overview with the threatened road in yellow and the border to Russia in red. 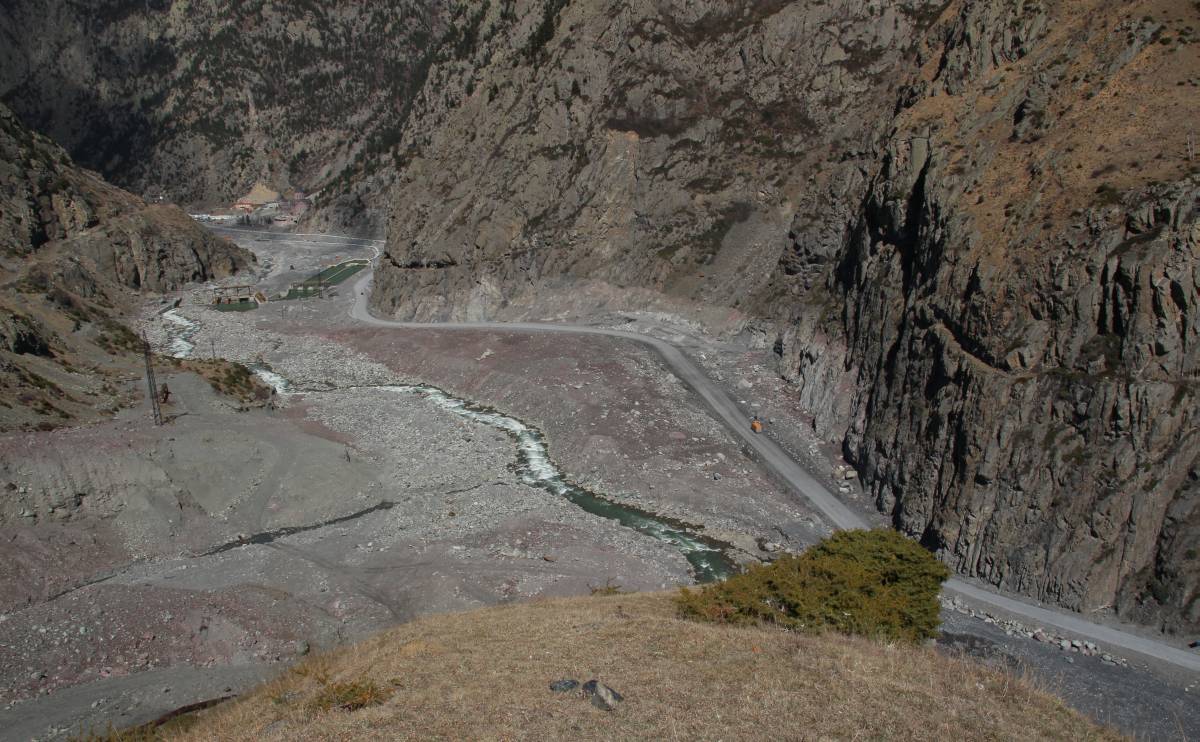 The large debris deposits from the last debris flows are still visible near the road and the power plant. 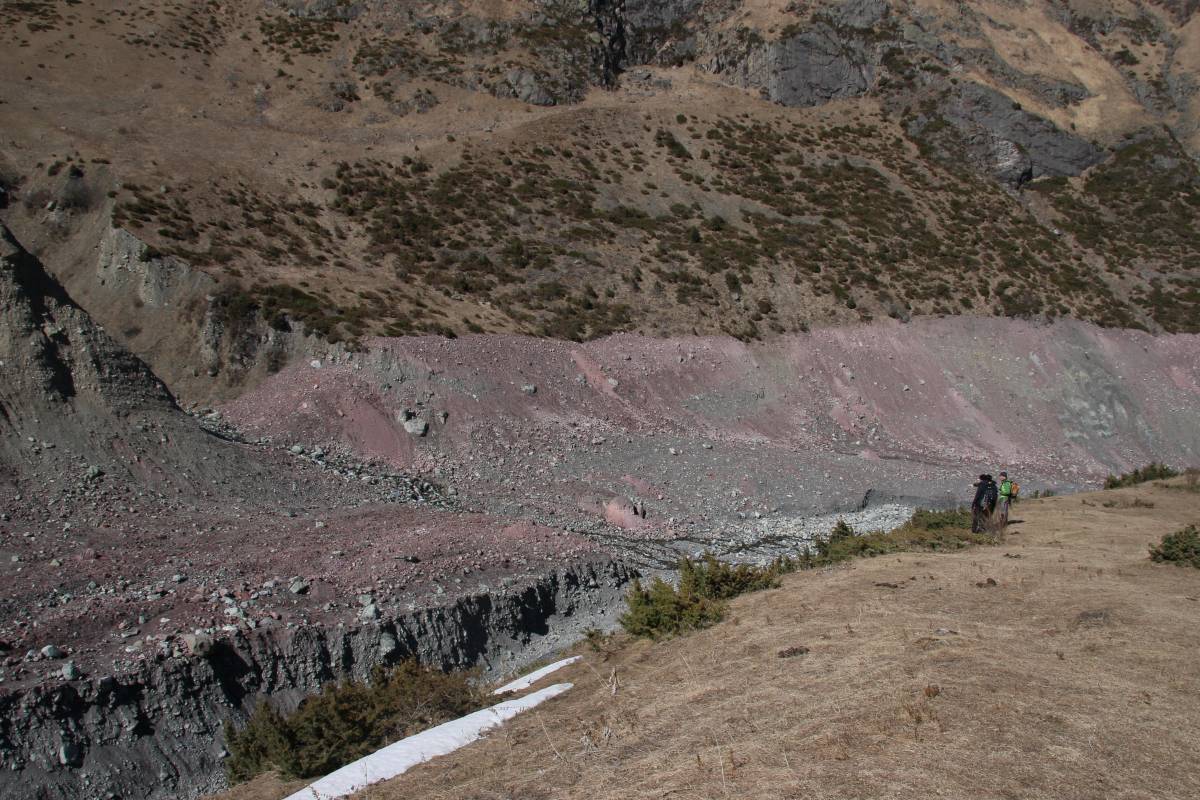 Where to put the sensors…? 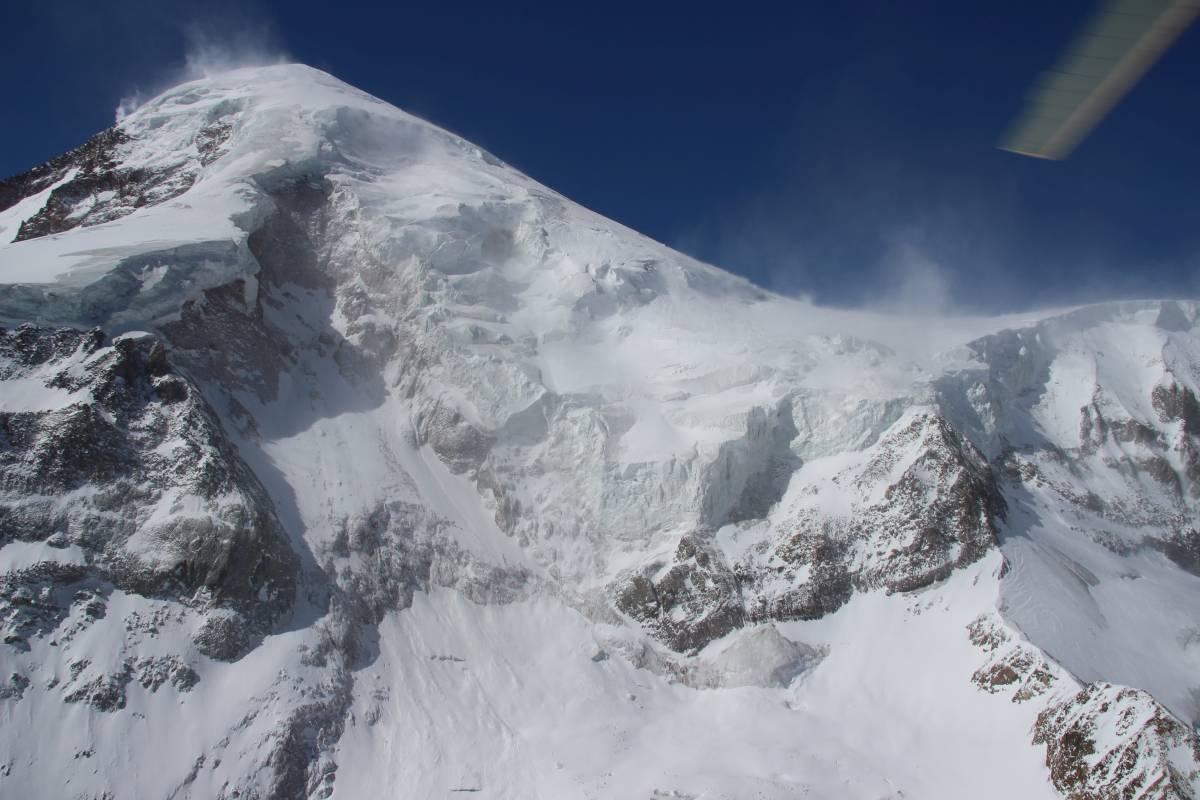 View up towards the glacier on Mt. Kazbek where a large portion of ice failed in 2014. 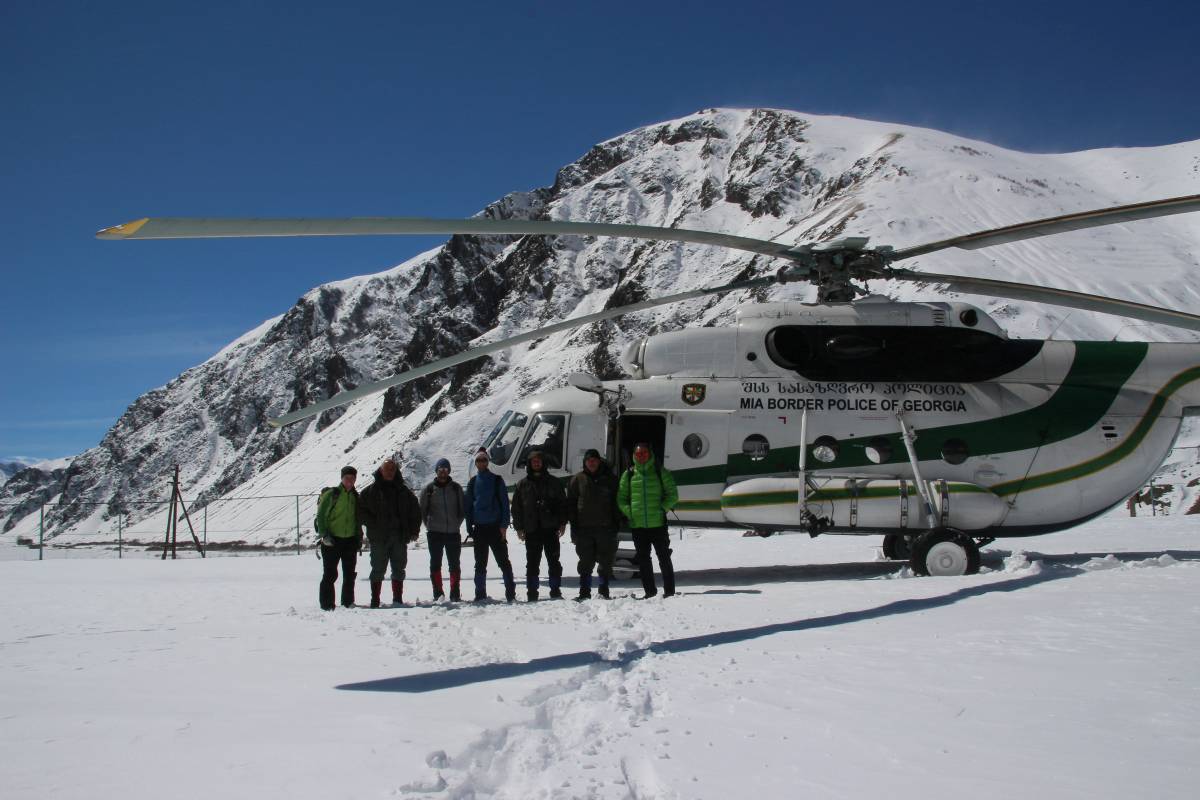 Group photo after the inspection in an MI-8. 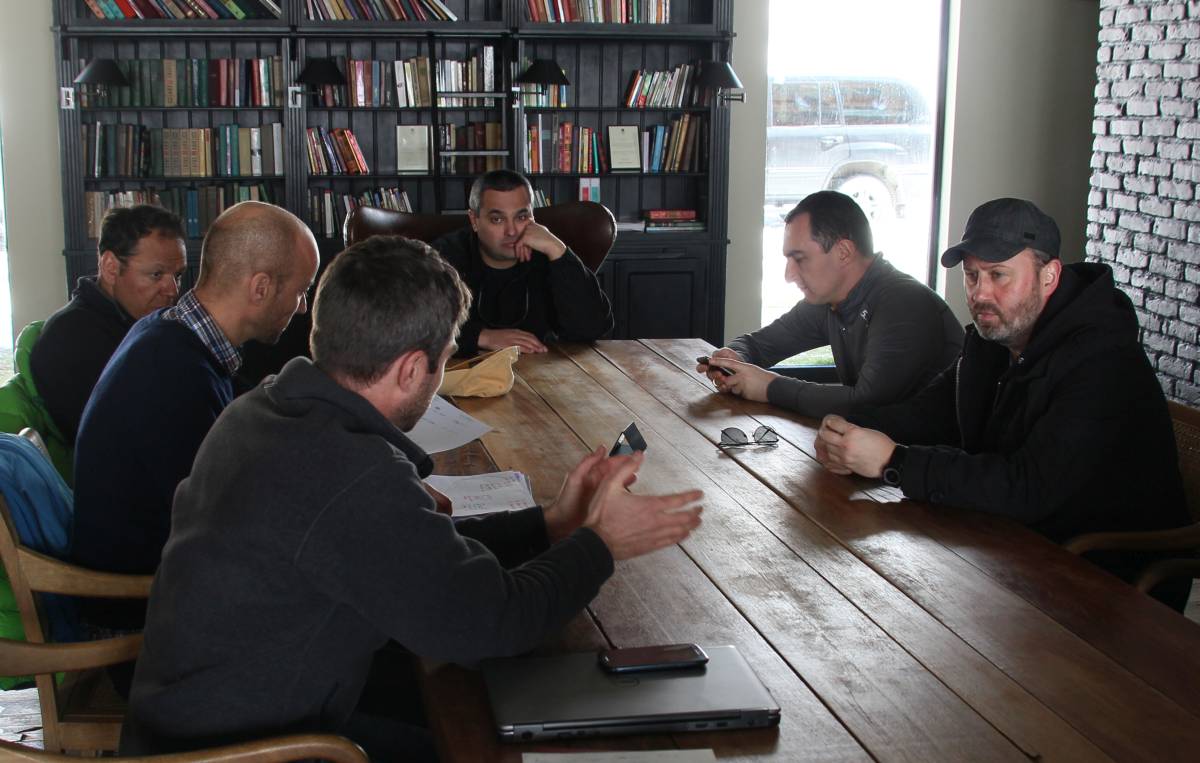 In discussion with the Georgian minister of the environment, the head of the National Environmental Agency and the head of the national emergency response corps. (April 2015, from left to right). 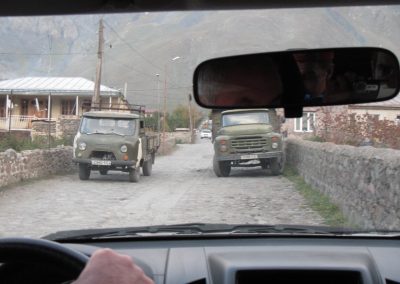 On the way to the debris flow site. The last part of the journey will need to be covered in … 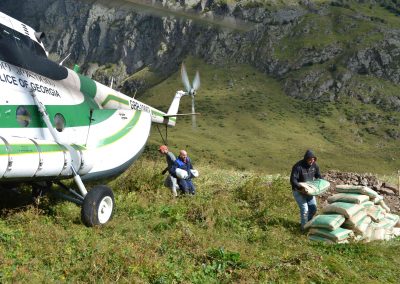 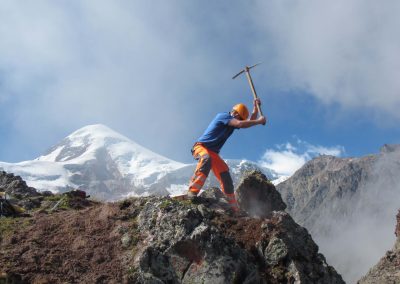 Laying the foundation of the upper station. 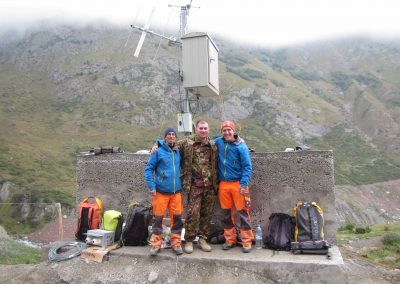 A large concrete base was needed in order to suspend the two radar gauges from a steel cables more than 200 m long. 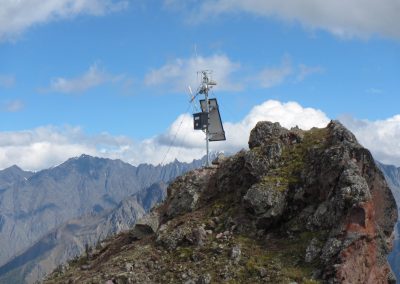 Webcams at the upper station provide regular images of the upper part of Mt. Kazbek. 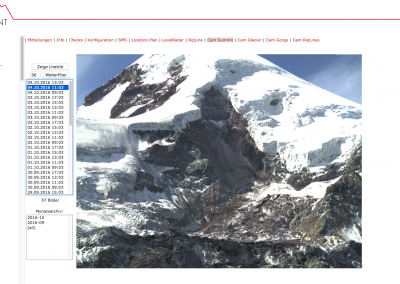 In the Geopraevent data portal, authorized users can always look at the most recent images of the rupture zone of the 2014 ice avalanche. 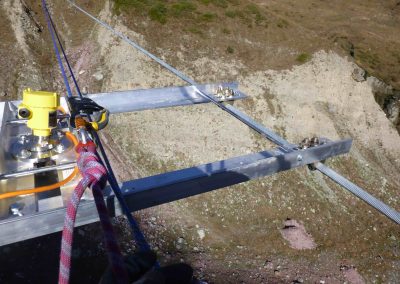 The radar gauges are fixed to three steel cables spanning more than 200 m over the channel.

Location of the alarm system.