Rockfall on the railway line in Gurtnellen

The rock fall that buried parts of the Gotthard Railway Line of the Swiss Federal Railways took everyone by surprise, even though some smaller falls had been registered from a nearby site three months before. The 3000 cubic meters of rock that broke loose on the morning of June 5th caused severe damage to the railway lines and resulted in a one-month closure period of Switzerland’s most important north-south link.

Together with geologists of the Swiss Federal Railways and GEOTEST AG we reached the rock fall site around noon on June 5th. The interferometric georadar, which was still at the rock fall site in Preonzo (TI), was immediately transferred to the Gurtnellen site. Thanks to its simple installation and the independent power supply, we were ready to conduct the first measurements around 8pm that same day – and provide a first assessment of the remaining danger of secondary falls. First evaluations around midnight showed that no imminent dangers prevailed. During the three following days of recovery works we were constantly present, analysing the radar data first-hand so that works in the danger-zone could have been stopped at the first sign of shifts in the wall. With the onset of heavy precipitation on the third day, some movements were detected throughout the talus fan and smaller rock falls were registered. Despite the fact that the radar is incapable of accurately predicting moving rocks in loose debris (since they usually start falling without prior movements), we could still provide a rough identification of the areas prone to movement in order to facilitate the work for local observers.

Once the pressing recovery works had been concluded, the installation of the protective measures could be initiated. All of the potentially unstable rock had been blasted away, the remaining rock face and talus had to be secured. 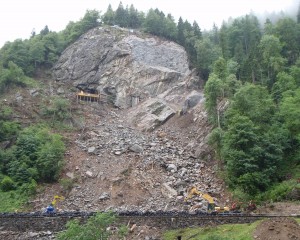 The Gotthard Railway Line is buried under piles of debris after a security blasting.

During this construction period, several independent surveillance systems were installed:

The surpassing of predefined thresholds automatically triggered the sirens at the construction site in order to evacuate workers. At the same time, geologists at GEOTEST were informed via SMS and the live data on our data portal served decision makers in planning further steps. On July 2nd, the Gotthard Railway Line could be reopened to traffic, but the surveillance system will remain in place for some time to come. 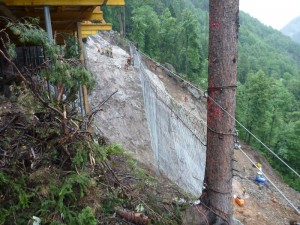 A temporary safety net was equipped with a trigger line that would immediately provoke an evacuation of the construction site as well as the closure of the railway line.

Three-hour cumulative deformations projected onto the digital elevation model of the Gurtnellen rock fall site. The georadar can detect the smallest of deformations at a high spatial resolution. Randomly placed red areas usually stem from movements in vegetation or loose debris. In this case, no large-scale deformations are visible – a comforting piece of information for local decision makers that could access such a live image online every five minutes. 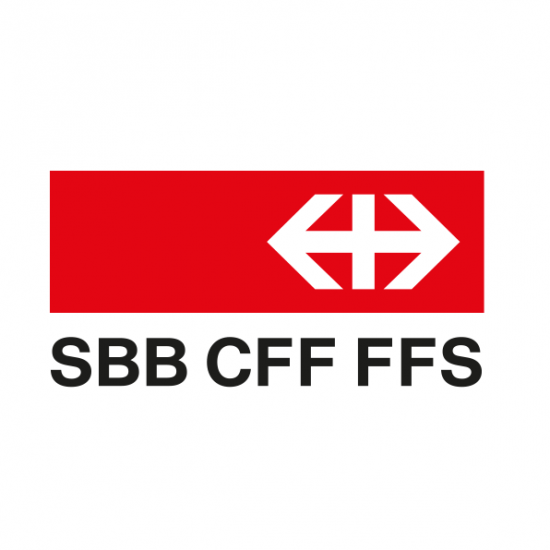 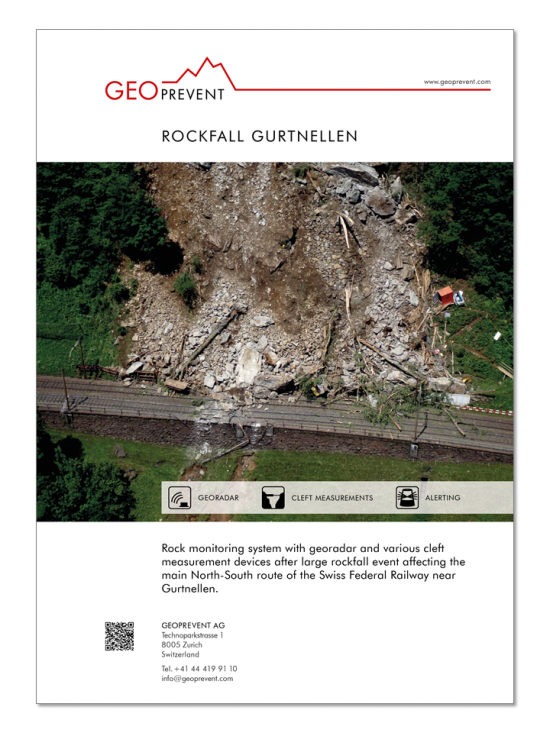