Highway 37A is the only road connecting the mainland centers and the coastal town of Stewart (British Columbia, Canada) and the border town of Hyder (Alaska, USA). Stewart serves as Canada’s northernmost year-round ice-free port and is strategically important for exporting goods to Asia. The only land-based access road, Highway 37A, leads from Terrace via scenic Bear Pass to the coastal center of Stewart. The weather conditions of the area are characterised by heavy precipitation combined with arctic winds leading to hundreds of avalanches every winter. A total of 72 active avalanche paths line the Bear Pass section on both sides and natural avalanches as well as avalanche control work often affect Highway 37A between November and May. On average , the road is closed for about 88 hours every winter and considerably more in snowy winters (up to 336 hours, MoTI Blog). In order to improve avalanche forecasts and road safety for Highway 37A, we developed and installed an autonomous avalanche detection system on behalf of the Ministry of Transport and Infrastructure (MoTI).

The radar system at the Little Bears site monitors the steep eastern slopes of Mt Shorty Stevenson at a distance of up to 3 km and monitors four avalanche paths simultaneously. The second station, George Copper, is located further east and monitors the northern  slopes of Mt Disraeli and Mt Gladstone including glacier. With this station, we monitor six avalanche paths at the same time at a distance of up to 3 km. Since neither electricity nor mobile phone reception is available in this remote area, we designed the stations completely autonomously. Both stations, Little Bears and George Copper, have no direct line of sight to Stewart. Therefore, a relay station for data transmission was set up at Mt Johnson. Detection data, high-resolution images and system-relevant status data are transmitted via two different communication channels (redundancy) from via Mt Johnson over a distance of 20 km to Stewart where they are uploaded to our servers.

We developed a sophisticated, energy-efficient system concept to ensure continuous operation throughout the winter months as well as under a snow cover several metres high. A combination of fuel cell and solar panels ensures reliable power supply, with the fuel cell only running in the absence of solar energy. For example, George Copper station is located in the shade of the opposite ridge from November to February and receives no direct sunlight. Whereas certain devices, such as the high-resolution camera, switch off at night for energy-saving reasons, the avalanche radar must function properly at all times. Heavy snow and storm conditions are a challenge for reliable functioning of such a system at the exposed locations. But it is exactly in these conditions that avalanches often occur. For this reason, we equip all avalanche radar stations with a dedicated anti-snow system. This ensures that the radar head itself is always snow-free and works perfectly at all times. 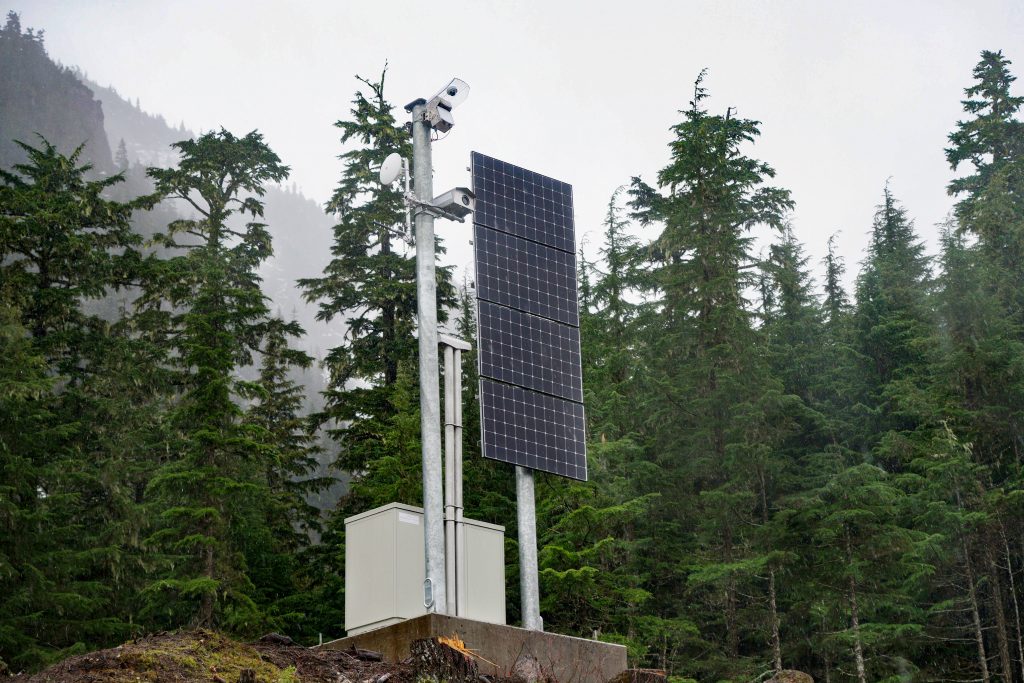 The repeater station at Mt Johnson is housed inside a 8.5 m high rocket-shaped enclosure, equipped with three south-facing solar panels. In addition to solar power, the repeater station is also equipped with a fuel cell. Mt Johnson is the key hub of the entire system which – in addition to data transmission – enables remote access to the stations for the Geoprevent team. We permanently monitor system functionality of all stations and receive automatic notifications in case of irregularities. This enables us to identify potential problems at an early stage and solve most of them without on-site intervention.

Upon avalanche detection, the radar activates the system-integrated, high-resolution camera to generates image series of the avalanche event. The radar tracks the avalanche and measures average front speed, duration and dimension of the avalanche. In addition to event images, the camera regularly takes pictures of the situation on site, beginning every morning when it is bright enough to focus. The images are of valuable information for the local avalanche forecasting team to support their avalanche situation assessment. All data is uploaded to our online data portal for access at any time by authorised users via PC, tablet or smartphone. In addition, the system automatically notifies the avalanche forecasters by text message and/or email after each event and including avalanche characteristics, such as distance, azimuth, duration, length and front speed. 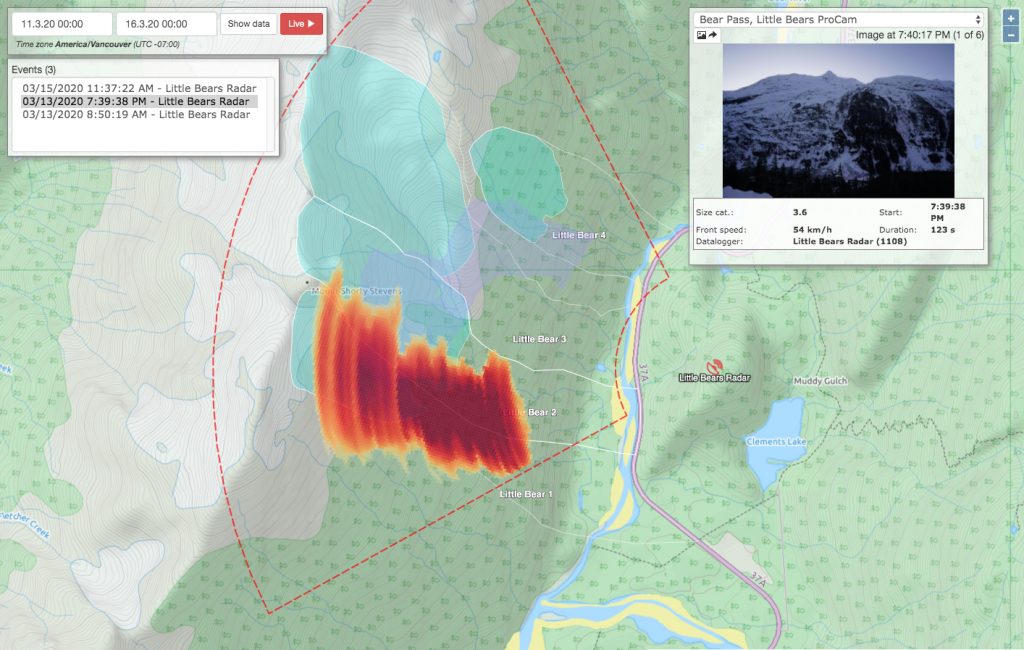 First season with more than 1200 avalanches

From November 2019 to May 2020, the avalanche detection system counted a total of more than 1200 avalanche events. Approximately 60% of these occurred at the George Copper site and 40% at Little Bears. Highway 37A is typically closed for about 88 hours every winter due to avalanches. Winter 2019/20 was a winter with above-average snowfall and therefore ideal testing conditions for the avalanche detection system. In the first season, however, road closures could be reduced to only 39 hours in total. More than half of this, i.e. 21 hours, was caused by clearing a 500 m long section of road that was buried by a very large avalanche with 5 m of snow and ice (Terrace Standard).

According to the local avalanche forecasting team, the additional information on avalanches, including localisation and event images, is of considerable help in dealing with the difficult avalanche situation and road operation during the winter months. Future plans include traffic lights and gates at the road sections at risk and system extension for immediate road closure upon event detection as well as automatic reopening in case the avalanche did not reach the road.

The AADS (Autonomous Avalanche Detection System) supports us considerably in assessing the current avalanche situation and enables us to better understand the regional avalanche conditions. As a result, we have been able to verify the accuracy of our forecasts and significantly reduce closure times of the highway by more than 40% of the annual average this season. 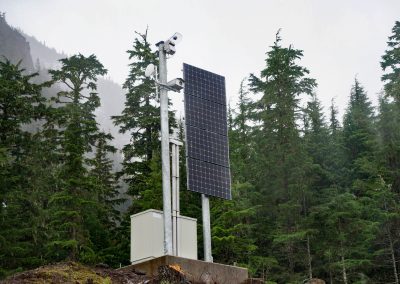 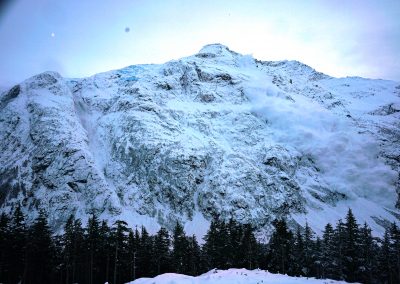 Upon detection of an avalanche, the radar activates the integrated high-resolution camera to take a series of images. Shown here is an avalanche event image at the George Copper site. 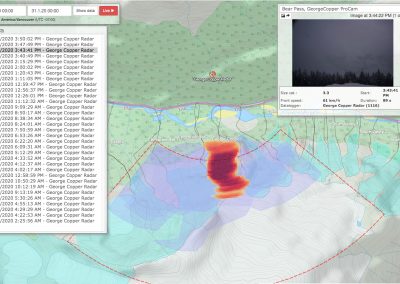 Avalanche event map event on our online data portal; the radar detects and tracks the avalanche in real-time and maps all events including additional avalanche data, e.g. according images, frontal speed, duration etc. 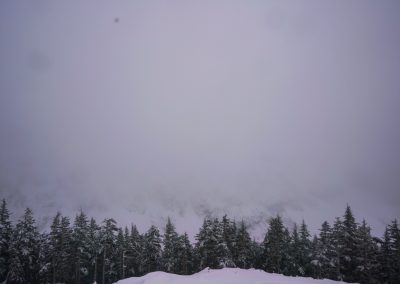 Typical weather conditions at Bear Pass: 90% of the detected avalanches occurred in no or low visibility due to darkness, fog, snowfall or poor contrast. 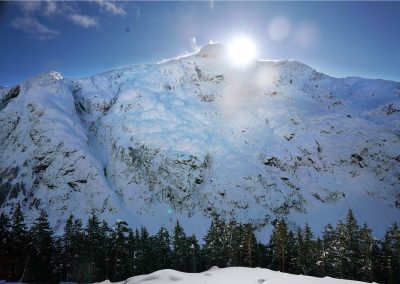 Triggered avalanche captured at George Copper Station. After several months in the shade, the first sun rays reach the station at the end of February. 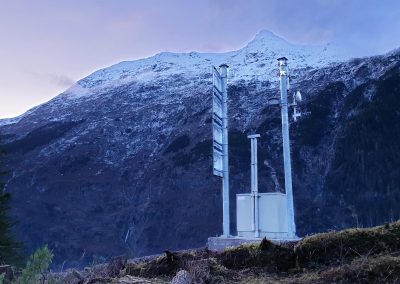 Little Bears Radar Station after installation in early November 2019: The radar reliably monitors the opposite avalanche paths at a distance of up to 3 km in often poor visibility conditions. 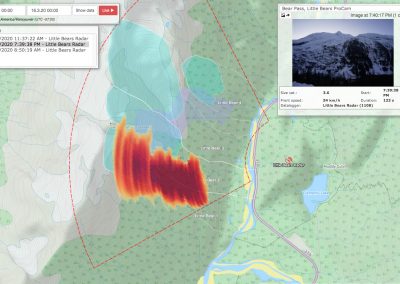 Avalanche event map of the Little Bears site in our online data portal with according images and avalanche characteristics. In addition, every avalanche event triggers automatic notification of the local avalanche forecasters via SMS and/or email. 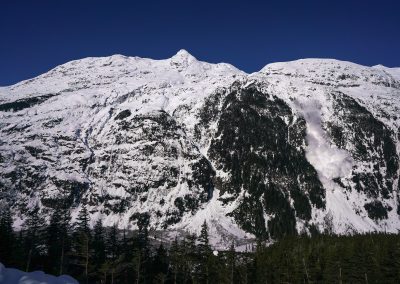 One of the few occasions when the detected avalanche could be seen at Little Bears: Weather conditions at Bear Pass and autonomous, reliable operation of such a system are challenging. 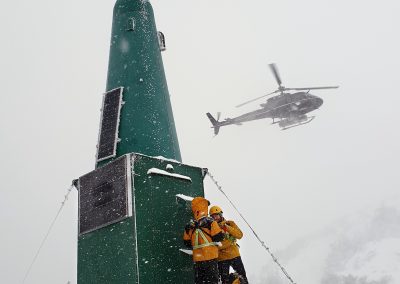 Repeater station Mt Johnson for communication with Stewart village during installation in November 2019. 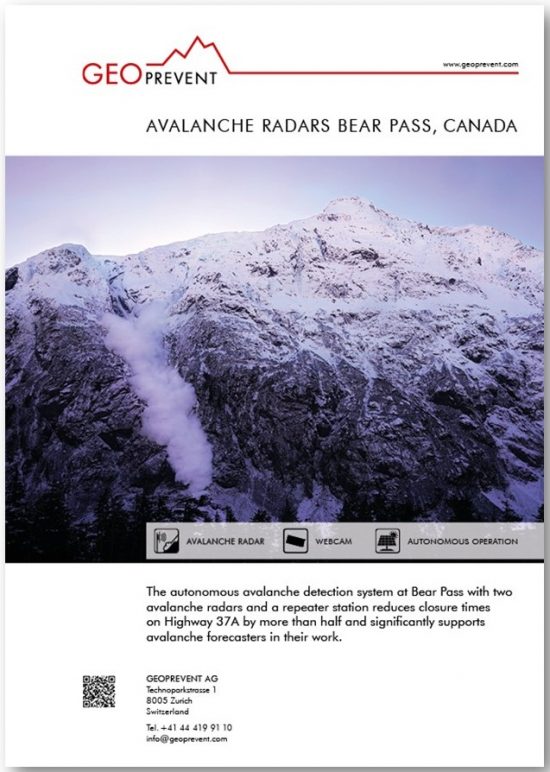 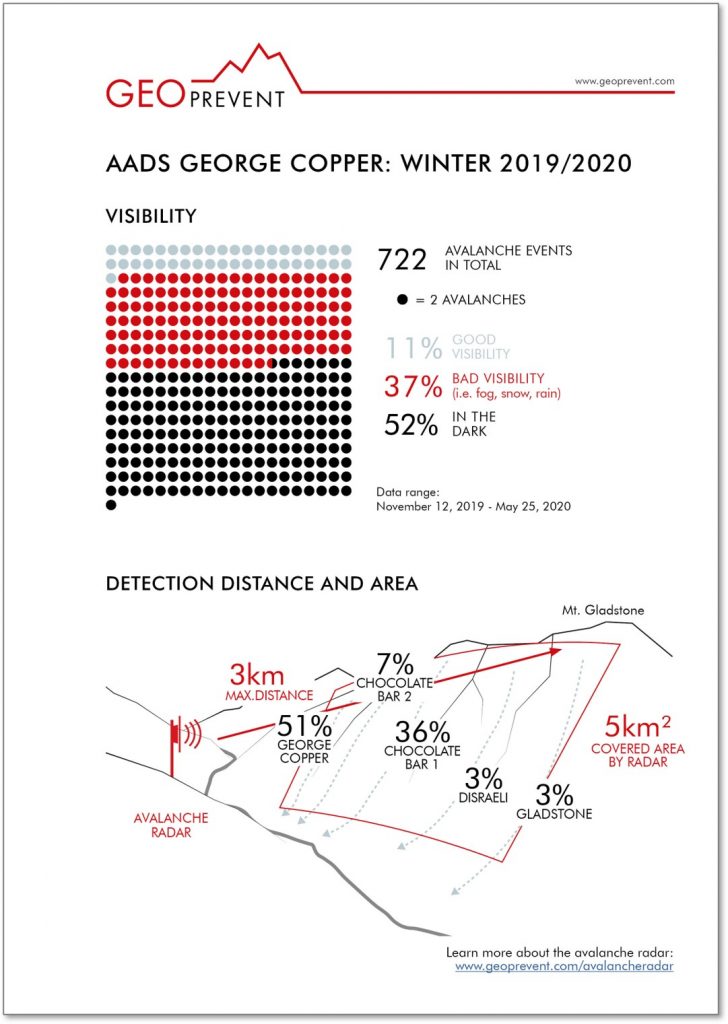