The Bregaglia region at the Swiss-Italian border is widely known for its tall and steep faces of granite peaks such as the Pizzo Badile, Sciora and Cengalo. The picturesque area includes a number of villages and connects the Swiss tourist hotspot St. Moritz with Italy. Pizzo Cengalo, particularly famous with climbers, recently caused major headlines around the world. On 23 August 2017, a large rockfall occurred on its north-east face that subsequently formed a powerful debris flow down the Bondsaca river (New York Times, BBC, National Geographic). Approximately 3 million m³ of rock broke off the mountain and turned into an immediate debris flow carrying huge boulders as far as the village Bondo. Whereas the village was prepared for such an event and casualties could be avoided, eight hikers were hit the the rockfall in the upper Bondasca valley. The village and surroundings were protected by a large catch basin and an alarm system.
23. August 2017, 9:30 at Pizzo Cengalo (Source Sciora hut).

In 2011 already, a smaller rockfall event took place at Pizzo Cengalo and deposited 1.5 million m³ debris at the foot of the mountain (NZZ in German). The following summer, heavy rain periods repeatedly led to debris flows that reached to Bondo at times. A subsequent hazard analysis revealed the high risk of similar events in the near future and highlighted the need of protective measures. Consequently, the authorities invested from 2012 to 2016 in a large catch basin and an alarm system with automatic road control for sections at risk. In 2013, Geopraevent installed a debris flow alarm system at Bondasca river located at the lower end of the valley and above the river gorge. The system consisted of a gauge radar and several trigger lines for permanent monitoring of the river level as well as webcams for remote inspection of the situation and recording of debris flow events. Traffic lights were mounted at bridges and other road sections at risk with automatic closure in case of an event. Additionally, exceeding a certain water level or rain quantity instantaneously triggered prioritized SMS to the authorities in charge. During the subsequent years no debris flows were registered. On 23 August 2017, the alarm system was triggered for the first time by the large debris flow resulting from the rockfall at Pizzo Cengalo. Automatic road closures and prioritized SMS communication worked as scheduled. The event did not release all unstable material and further break-offs and associated debris flows were (and still are) expected. At the same time quick cleanup of the catch basin was required to make space for further debris flows. Cleanup operations were ongoing 24h and the road to Italy should be reopened for traffic as soon as possible. Hence, a comprehensive monitoring and alarm system was required to ensure safety for workers, residents and drivers.

The previously existing alarm station at Prä was damaged by the very large event of 23 August 2017. With the active support of the municiplality, we repaired and extended the alarm station two days later. In addition, we installed a second alarm station upstream at Lera with longer warning times. A third station was set up at Sciora hut to monitor Pizzo Cengalo around the clock by Georadar. All stations are connected to the online data portal with access for authorized users at any time. 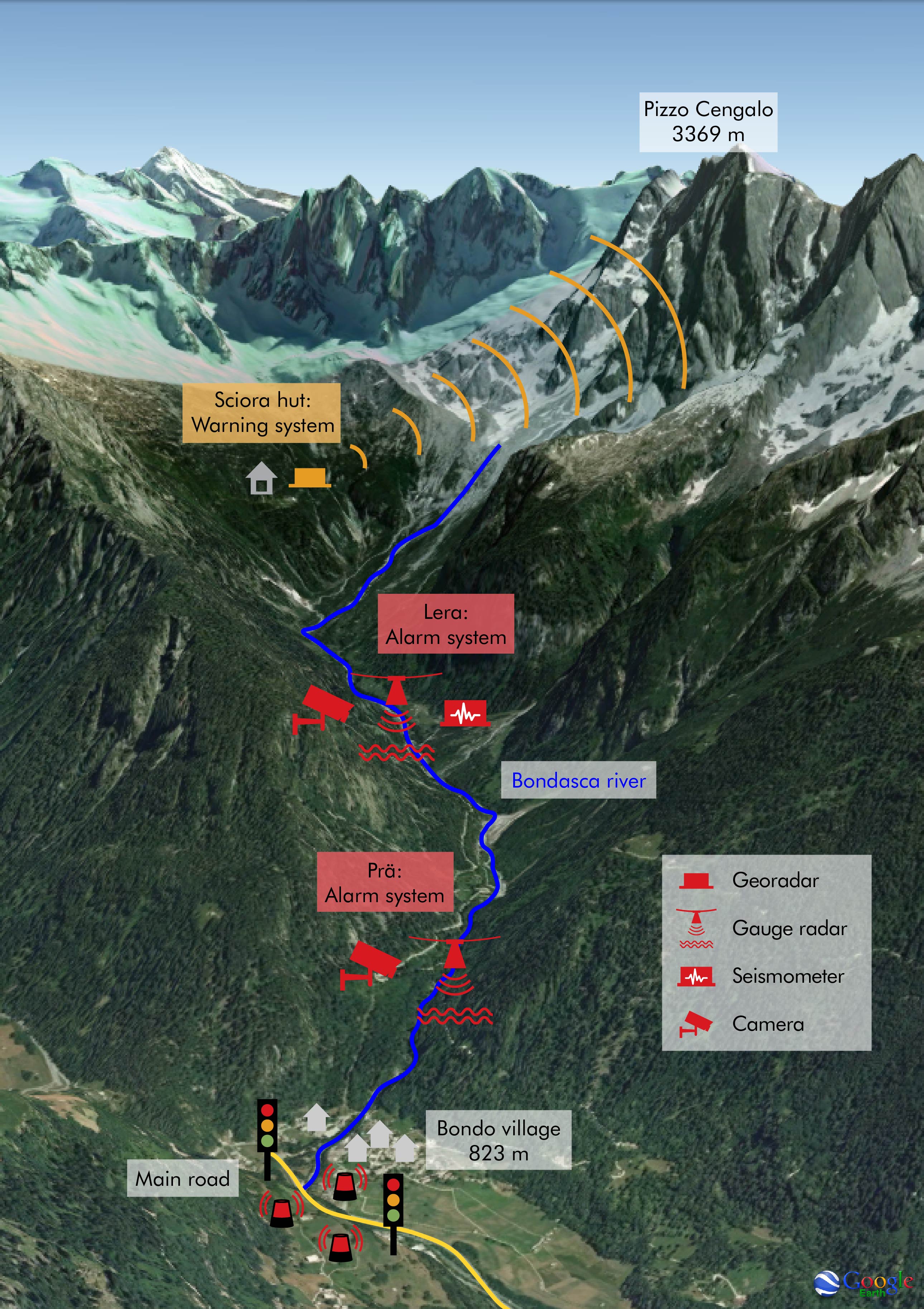 Alarm station Prä
This station was originally installed in 2013 and triggered the alarm on 23 August 2017 in Bondo. After the event, this station was repaired and extended. It now consists of two gauge radars and two live webcams in both directions of the river. The warning time from this station to Bondo village is 2 minutes.

Alarm system and data transmission
The alarm in Bondo is triggered if one of the stations detect a debris flow. The bypass road, exposed bridges and other road sections at risk are automatically closed by traffic lights. Alarm horns mounted at critical sections inform workers and drivers to immediately eave the danger zone. The alerting options are flexible and can be moved according to the current location of clean-up operations.

Given the local topography and the redundancy requirements, alarm and data communication from the individual stations is a challenging task. Several communication means are used to guarantee reliable and fast alerting and data transmission to the online data portal. According to availability and feasibility, radio, WLAN, GSM, DSL and glass fibre are applied. 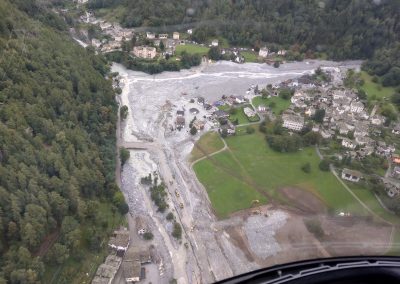 Helicopter view of Bondo village and the flooded main road. 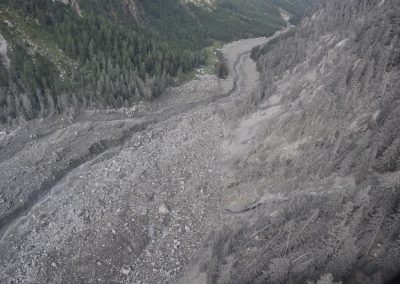 Deposited debris at the upper Bondasca valley with dust covered trees right after the event of 23 August 2017. 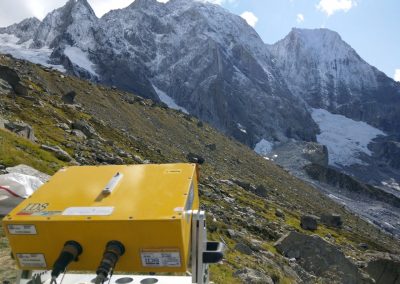 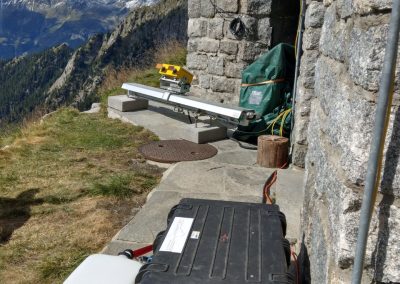 Georadar (yellow), camera and fuel cell in the front. 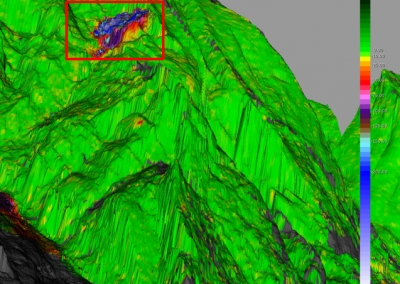 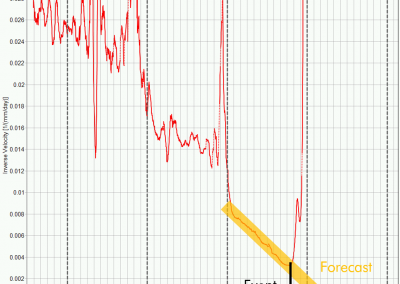 Radar prediction of the rockfall event of 15 September 2017 by inverse velocity analysis. The break off finally occurred a few hours before without causing a debris flow. 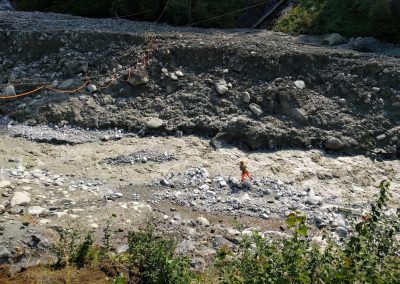 One of the gauge radars at Prä alarm station. 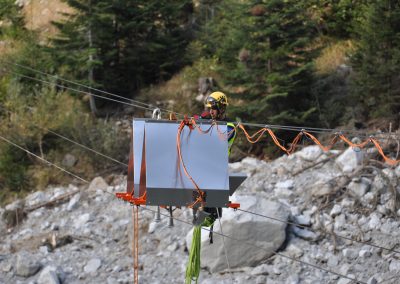 Installation of the gauge radars at alarm station Lera.

Extension of the alarm station Prä.