The Axenstrasse is a road section of the Swiss national road network at lake Lucerne and is part of one of the most important North-South corridors in Europe. On average, 16,000 vehicles travel the picturesque route along the steep rock faces and through wild river valleys every day. The route is prone to rockfall and debris flows in several places posing a constant challenge for the road operator. The Gumpisch valley between Sisikon and Flüelen is one of the problem zones: In January 2019, a large rockfall occurred in the upper part of the valley resulting in massive rock deposits in the channel below. The road was not directly affected by this event. But on July 28, 2019, heavy rainfall triggered a small debris flow that, in turn, caused individual boulders to detach and tumble down to the main road. Fortunately, the large blocks passed underneath the Gumpisch Valley Bridge without causing major damage. The road was immediately closed and remained so for over six weeks due to further expected rockfall events. During this period, extensive rock blasting and stabilization work was carried out and at the same time we developed and installed a comprehensive rockfall monitoring system with automatic road closure and reopening.

The monitoring system in the Gumpisch valley is tailored to the local hazard situation and consists of various sensors and cameras at different locations. The key elements of the system are two rockfall radars at the Buggistäfeli site about 400 height metres above the road. They permanently monitor the debris accumulations and automatically detect moving rock masses in real time, no matter whether it is a debris flow or large individual blocks. Radar works in all visibility conditions; at night, in fog or snowfall. At the same time, three seismic sensors at the same location measure ground vibrations and detect rockfall or a debris flow through the generated ground movement. The sensor fusion of both technologies allows for maximum detection reliability and, at the same time, a minimum number of false alarms. Our algorithms detect an event by certain combination of sensor signals in real-time and and automatically switch the traffic lights at road below to red. Until December 2019, the SBB (Swiss Federal Railways) construction site further downslope was also alerted with alarm horns. 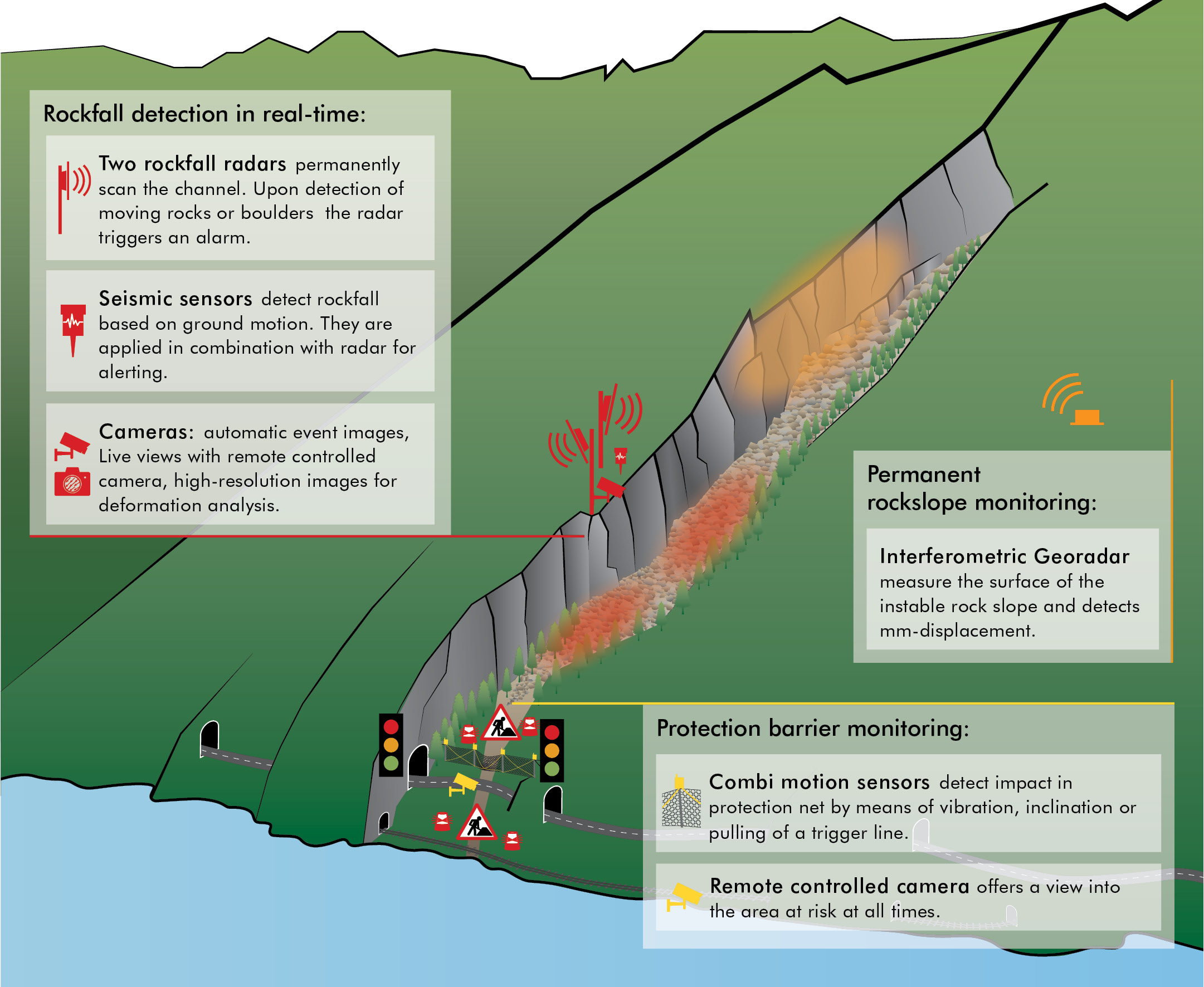 The warning time for a rockfall event at this site is short: about 20 to 50 seconds elapse between movement detection and the boulder arriving at the road. Therefore, the road must be closed as soon as possible upon event detection. But not every moving boulder reaches as far as the road. Many of them come to a halt further up and remain in the debris channel. Therefore, we equipped the protection barriers above the road with combined motion sensors; the small, robust sensors detect an impact or passage of a boulder either by the induced vibration or by pulling the integrated trigger line. If it remains calm in the protection barriers upon detection of a moving boulder by the radars at Buggistäfeli, the traffic lights automatically switch back to green after two minutes. In case the motion sensors detect an impact even in the vicinity of the road, the road remains closed for the time being and an expert team of geologists is automatically notified to survey the situation via webcams – and if necessary on site. Once road safety is ensured again, the road will be released for traffic again.

Several cameras allow for remote site inspection via online data portal. Two PTZ cameras (pan-tilt-zoom) at Buggitäfeli and the road side can be remotely controlled at any time via PC, smart phone or tablet. In addition, the radar activates the cameras in case of an event for automatic image series of the rockfall or debris flow.

June 9, 2020: Heavy rainfall triggered several rockfall events in early June 2020. The upper radar detected this event at 8:26.10 PM and immediately triggered an alarm (image above). 50 seconds later the combined motion sensors report an impact in the barrier above the road. Camera images clearly show the passage of two boulders (picture below). The barriers the boulders cut through is designed as a “curtain” (attenuator) with the main purpose of event detection. The road is primarily protected by the dam and the alarm system.

The rockfall radar tracks the detected movement and draws the event onto an online map. The rockfall map displays all events including event images and additional parameters, such as average speed or duration of the event within the radar’s field of view (image below). 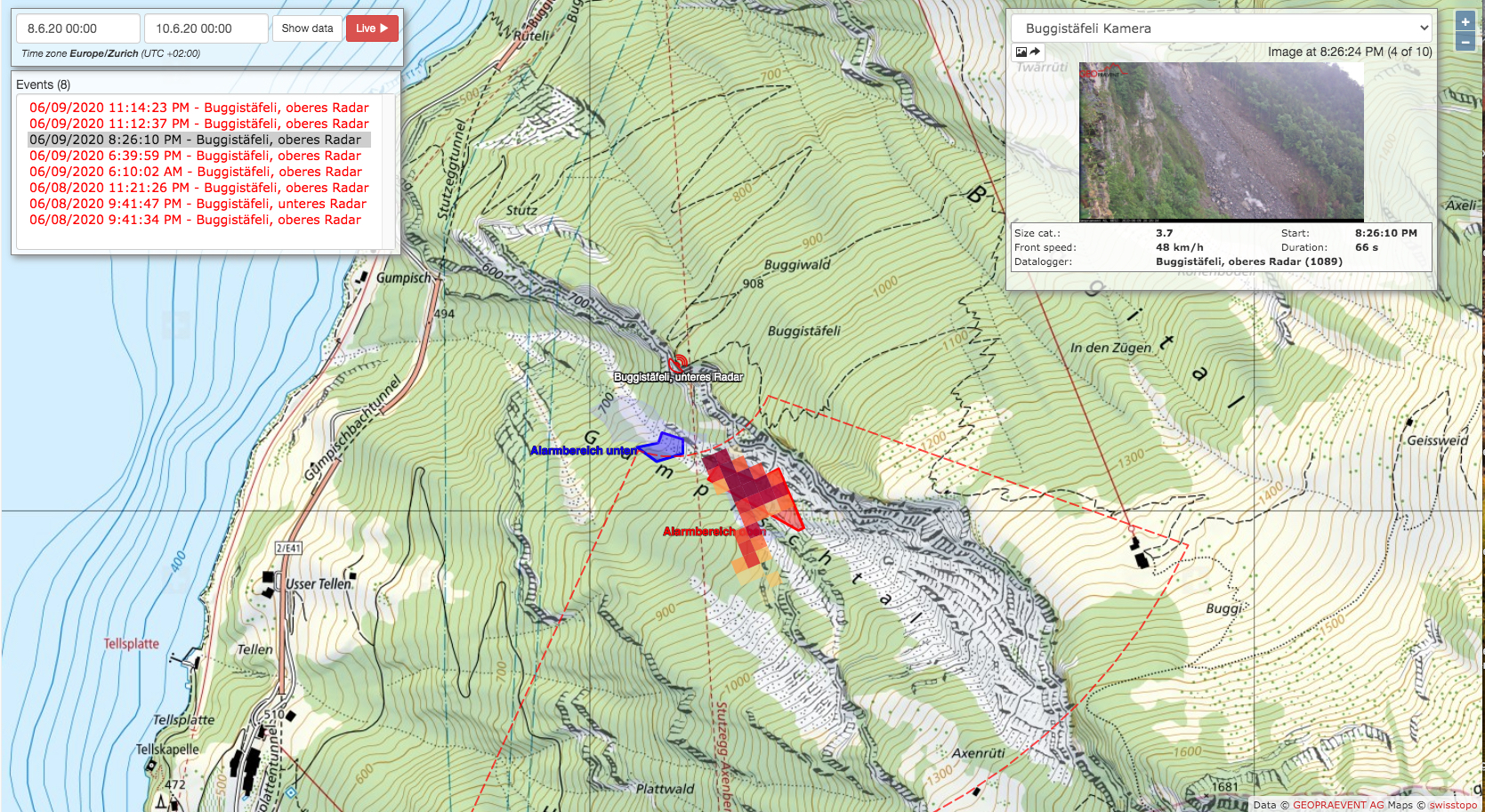 Interferometric georadar measurements were carried out from various locations to ensure that the January 2019 rockfall site in the upper Gumpisch was no longer unstable and at risk of failing again. We installed the georadar for permanent measurements at a suitable location in the forest above the road and operated the instruments with a fuel cell and solar panels autonomously for 6 months. In addition, we performed periodic measurements of the entire Gumpisch ridge from the opposite lake shore, at the village of Bauen.

We further monitor the debris-filled channel with high-resolution camera images and automatically calculated deformation analyses over the long term. This enables to identify slow movements within the channel and to take early action if an acceleration should occur. Both, an upward and a downward pointing camera at the Buggistäfeli site take pictures of the channel several times a day and transmit the images with 42 MP resolution to the Geopraevent servers. Special algorithms then sort the images, compile suitable analysis pairs and perform elaborate comparative calculations.

We developed the combined warning and alarm system within just a few weeks and put it into operation in September 2019 so that road reopening was possible by mid-September. A number of events have occurred since that were all correctly detected by the alarm system. In addition, the construction of a rockfall dam with protection netting was completed. The dam is intended to divert falling boulders towards the bridge and prevent them from impacting the road. All nets were equipped with combi-sensors for immediate and automatic impact detection.

Buggistäfeli station with the rockfall radar, several cameras and the upper part of the debris-filled channel in the background. 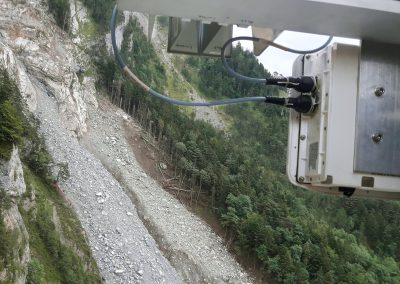 The rockfall radar detects moving boulders or a debris flow regardless of the prevailing visibility conditions (e.g. darkness, fog, snowfall). 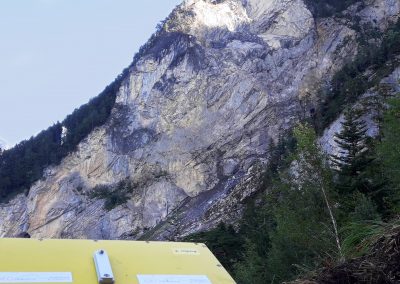 The interferometric georadar permanently scanned the site of the January 2019 rockfall event from the Plattwald site.

Buggistäfeli station is located on a rock spur about 400 metres above the road and monitors the channel two rockfall radars, one pointing up and one pointing down. 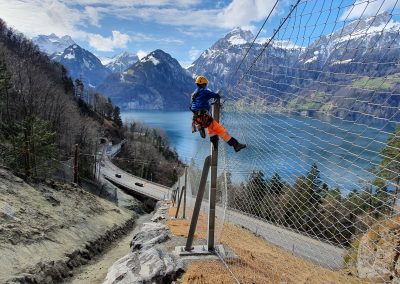 Installation of the combined motion sensors in the protection barriers on the dam for automatic detection of an impact. 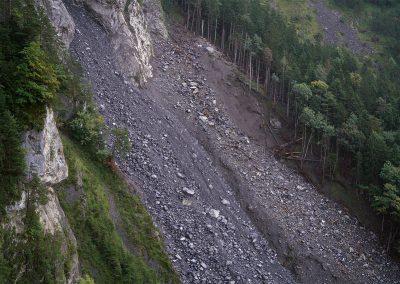 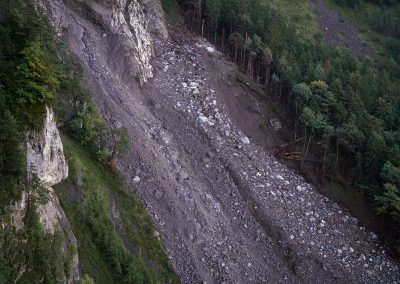 …and the day after. 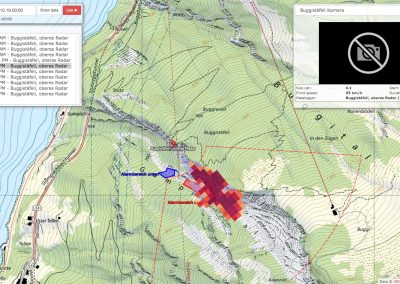 Online map of the debris flow events during the night of October 2 to 3, 2019. All events correctly triggered an alert and closed the road. 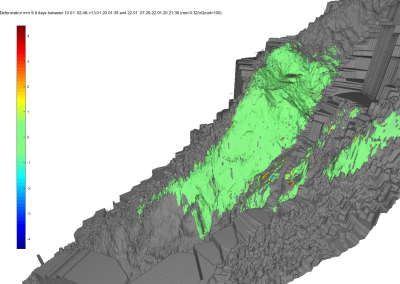 Deformation analysis of the slope failure area in the upper Gumpisch valley site. This figure shows the mm-analysis over 10 days measured with the interferometric radar. 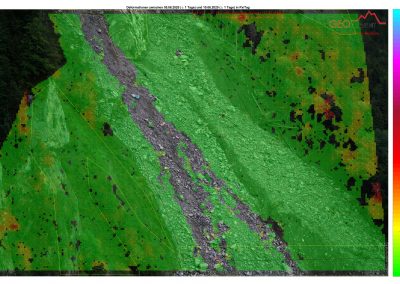 Deformation analysis with the DEFOX PRO camera from Buggistäfeli: The grey area indicates a significant surface change (due to the rockfall events in early June 2020), but otherwise the debris area is stable. 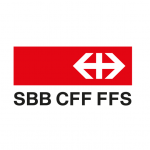